In a thread a few weeks ago, I referred to the 30 year old elephant ad put out by the AAA. Making fun of continental breeds, mostly simmental I think. Cows too big to be efficient, eat too much, carcass too big, etc. Looks like the tide has turned. I noticed in the latest issue of Sim-Talk (free Simmental publication for commercial producers - go to simmental.org to sign up) a new Simmental ad showing Meat Animal Research Center data that shows that Angus cows now have the heaviest mature weight of the 16 beef breeds studied: 20 pounds heavier than Charolais, 39 pounds heavier than Hereford and 74 pounds heavier than Simmental. Looks like maybe there is a new elephant in the room. I know some here have mentioned having angus cows that are 1800 pounds and even 2000 pounds. Who needs that size cows? Just seems too big to me. My simmie cows are about 1400 pounds at maturity. Plenty big for me and maybe too big for many environments. Study looked at over 100,000 weight records. Many years ago, some of the simmental cattle had a reputation for being hard doing, hard keeping. Extra input to maintain body condition. I remember about 10 years ago an article in the simmental monthly member publication that reported that angus had become harder keeping than simmental.

Has this happened due to chasing carcass traits? How did the little angus of years ago become the biggest cow of 16 major breeds? Good or bad? From the MARC website: Adjusted for sire sampling, Angus was heaviest at maturity of the breeds compared. Deviations from Angus ranged from -8.9 kg (Charolais) to -136.7 kg (Braunvieh). Ordered by decreasing MWT, the breeds ranked Angus, Charolais, Hereford, Brahman, Salers, Santa Gertrudis, Simmental, Maine Anjou, Limousin, Red Angus, Brangus, Chiangus, Shorthorn, Gelbvieh, Beefmaster, and Braunvieh. These breed effects for MWT can inform breeding programs where cow size is considered a key component of the overall profitability.

Here are the old elephant ad and and the new ad as a PDF. 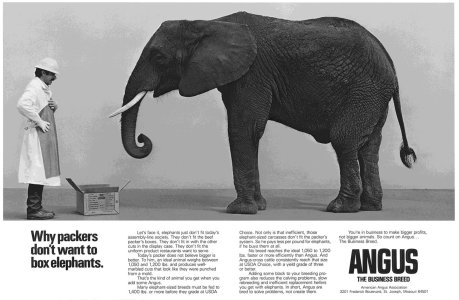 Biggest calf I ever weaned was 825# out of a half Chianina first calf heifer and by a little Hereford that jumped the fence. That heifer matured at 2K plus.

But I've always tried to wean calves at half the weight of the cow producing them. Hard to do. But the best cows do get close to doing it. In Arkansas cows were 1200#, but in South Dakota they had to be bigger to do well in the winter blizzards. We ran them about 1500#. Both places weaning 600# calves was our goal.

Simmentals were monsters when they first started to become popular. What happened to them?
OP
S

Travlr said:
Simmentals were monsters when they first started to become popular. What happened to them?
Click to expand...

I think selective breeding to make them better than the original European versions bred for beef, milk and draft. Don't see many oxen in this country now. Lots of progress made in regards to birth weight, calving ease, frame, mature size, efficiency and other important traits. I think the elephant jinx has moved on. Lol.

My cows got 100 lbs bigger when I started weighing and selling off the ranch.
D

Not many cows over 1,400 here. The majority are in the 1,100-1,200 pound range. That is mostly the environment. Lots of serious hills and long walks to water. Take these cows to flat easy lush pasture and they would pack on 100-200 pounds fairly quick.

Don’t have scales, so going by what ours weigh when selling by the pound. Biggest cows I’ve had were two Herefords that hit close to a ton with one weighing in at 1995 after she had calved and lost the calf. Sold several registered Angus cows over 1800.
Don’t have any of those real big cows left
Now I’d say based on more recent sales our biggest cows would be 1500 in ideal condition.
Years ago with registered Charolais the heaviest cows were 1800.
Something that I have been noticing is that most all of the real big Angus or Hereford cows did not wean off calves significantly larger than the other cows.
I did notice larger calves at weaning when our cows were bred to a Simmental bull.
The heaviest weaning weights I have had consistently were from the purebred Charolais, they averaged considerably more than anything else I have ever had.
It’s been interesting, in that even though our Angus calves don’t wean off at real impressive weights, the ones retained for cows have mostly matured pretty good size, which probably isn’t all that desirable.

Travlr said:
Simmentals were monsters when they first started to become popular. What happened to them?
Click to expand...

They turned them into part angus
R

Angus didn't get that big all by themselves.

Just because they are black or red, don't make em all angus.

MurraysMutts said:
Just because they are black or red, don't make em all angus.
Click to expand...

I have a running joke, that I've mentioned before; Forty years ago Simmentals weren't blk and Angus didn't weigh 1,800lbs.

MurraysMutts said:
Angus didn't get that big all by themselves.

Just because they are black or red, don't make em all angus.
Click to expand...

Maybe my memory is faulty... but I don't think so.

I believe some Chianina found it’s way into most breeds in the 80’s too.
Old time red and white Simmental is likely back in some Hereford lines.
Always heard about Holstein in Angus too, and the excess white, lack of rear end and several recessive traits makes you wonder about some of those lines too.

Ky hills said:
I believe some Chianina found it’s way into most breeds in the 80’s too.
Old time red and white Simmental is likely back in some Hereford lines.
Always heard about Holstein in Angus too, and the excess white, lack of rear end and several recessive traits makes you wonder about some of those lines too.
Click to expand...

An Angus with a little white on here udder will always milk well. Now I wonder where that came from? 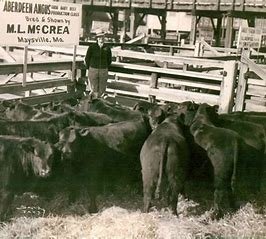 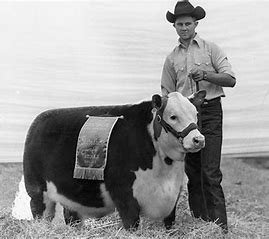 Maybe my memory is faulty... but I don't think so.

didn't have to build pens so tall either.

neighboring ranch was running big old braford cows in the 90's but their pens were built for old style Herefords. not sure how they worked their cattle. we had a wild 3 year old longhorn steer over there and when they finally penned him they almost killed him roping him half a dozen times when he jumped out, instead of just tying him up.
W

Looks like you would have saved a bit on yard building.

SBMF 2015 said:
An Angus with a little white on here udder will always milk well. Now I wonder where that came from?
Click to expand...

Have heard that many times too.
I’ve have had several Holstein X Angus heifers that I kept for cows, some of them could pass for straight beef cows. 3/4 Angus calves from that cross will almost always be hard to differentiate from from our idea of straight Angus these days.
I’ve heard somebody say that they thought a popular Angus bull several years back in a semen catalog looked like a Holstein cross. I had noticed that the disposition of descendants from that bull were questionable too.
E

Weaning weights were different for the belt buckle cattle. 300+ pounds was acceptable. That situation and the excess fat was the reason meat producers brought in other breeds. Herefords in the west kept some size and function. In the east, the trend was to small popped eyed cattle that exacerbated the pink eye and cancer eye problems. Some of the original white on Angus udders was due to the origins of breeds selection out of the shorthorn types in the old country. Holstein and other breeds were added in the 70's. Some was intentional and some was not. Likely the most influential and famed part Holstein "Angus" bull was accidentally 1/8 Holstein but he added the dairy traits and was heavily used for the additional function of his decedents.

Dumb question: aren't packers going to heavier carcasses and finishers going to higher kill weights? Might be a tie in to more cow weight.
A

simme said:
I think selective breeding to make them better than the original European versions bred for beef, milk and draft. Don't see many oxen in this country now. Lots of progress made in regards to birth weight, calving ease, frame, mature size, efficiency and other important traits. I think the elephant jinx has moved on. Lol.
Click to expand...

Here… those traditional simms were being discounted pretty hard in the late 90s early 2000..I had a couple bulls that I had previously used on Brahmans and F1 Brafords...but man those calves
OP
S

Some interesting thoughts and comments. No doubt there has been infusion of some outside genetics into some breeds - allowed/encouraged by some breeds and "illegal" in angus and hereford. But I suspect the % of outside blood is pretty low.

But think about the data and the science. If Angus are now the heaviest of those 16 breeds, that would seem to indicate that the genetics did not come (on average) from those 16 (now smaller) breeds. Some Holstein maybe. Hard to reason that simmental are now a smaller breed (74 pounds lighter than angus) because of angus genetics. If simmental became lower weight because "people turned them into angus", then it must not be from today's angus. Seems like the angus genetics would make breeds heavier now. Of course, you can select individual animals of many breeds to get traits that you want. Which brings me to my point.

How have breeding decisions and selection played a role? I am thinking that angus breeders must be selecting for these heavier mature weights - whether on purpose or inadvertent. Maybe from chasing numbers or indexes, or carcass, or popular high dollar "fifth avenue" lines. I don't think it is evolution, I think breeders are selecting for it.

So the white elephants and the spotted elephants are gone. Black elephants are the new trend. I guess that AAA ad is permanently retired now. But angus remains the largest breed in terms of numbers and popularity. When I say "angus", I am referring to the black AAA version. Those red outcasts from the original AAA line have been taken in a different direction by a more progressive association. Just wish they could solve some of the feet issues.
Share:
Facebook Twitter Reddit Pinterest Tumblr WhatsApp Email Share Link

B
2 Questions about Mature cow weight
2