We have had a very wet spring here, and the calves are coming along nicely. We plan to turn out the bulls on June 1st, and have been AIing cows for the past week. Some of the Murray Grey sires that we are breeding to include Cadella Park Golden Boy, Victory Power Play, Ballee Thumbs Up, and Monterey Marshall. We also have a 50% Guernsey x 50% Murray Grey cow that we are AIing to a Guernsey bull in hopes of having a replacement in the coming years.
These are the two bulls that we are using natural service this year, BB Backbone's General and BB Backbone's Rio Grande. General is a 6 year old Monterey Marshall son that has been siring some really nice calves for us for the past few years. We used Rio Grande on heifers this past fall, but this will be the first year that we have bred him to mature cows. He is a 3 year old son of Ballee Thumbs Up. 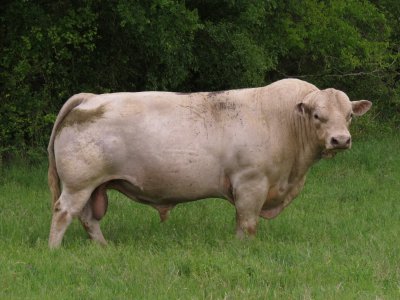 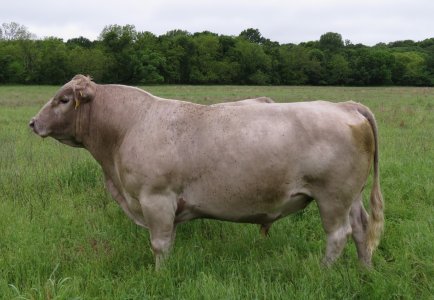 And here are some pictures of this year's calves.
101 Bull- A 9 week old son of Cadella Park Golden Boy 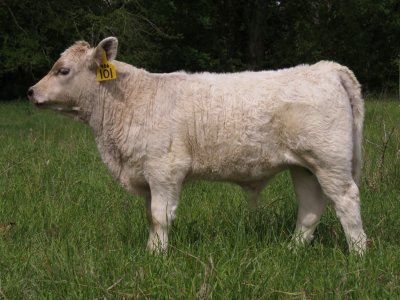 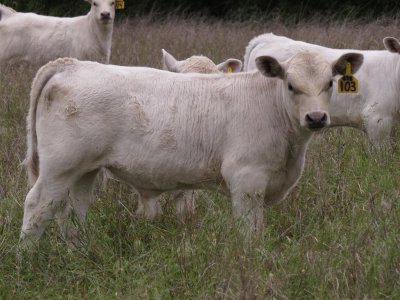 104 Heifer- A 3 month old daughter of Ballee Thumbs Up 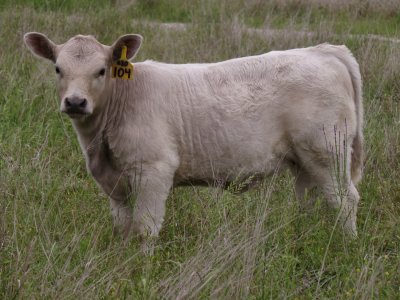 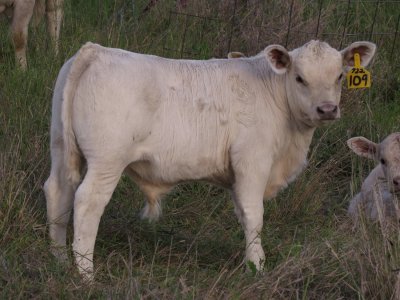 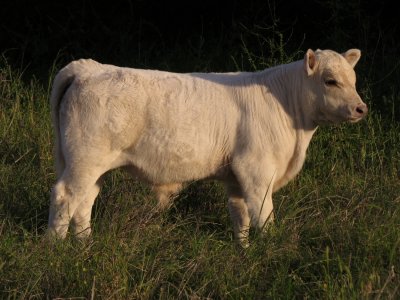 Do you have a pic of the Guernsey x Murray Grey cow? Just wondering what she looks like.

Nice calves, you are a good photographer of livestock.

As always very nice cattle. This has never happened before but I can say I am not a huge fan of the Rio Grand bull he isn’t bad but not as good as others you have posted. But the proof is in the pudding and if any of those calves belong to him he is sure doing a good job
OP

moses388 said:
Do you have a pic of the Guernsey x Murray Grey cow? Just wondering what she looks like.

Yes I do! She is pictured here as a 7 year old. 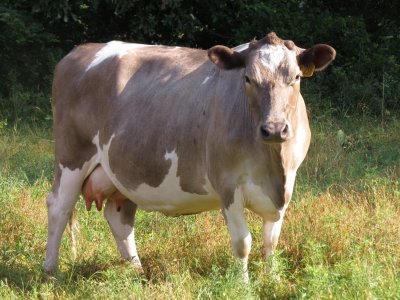 And this is her full brother back in 2013. This photo was taken a few weeks before he was processed. 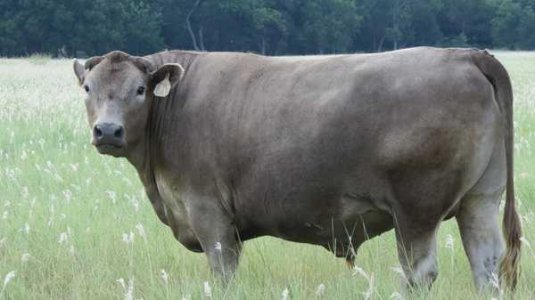 Thank you for the kind words. TCRanch- General was a bull that was born on our place and we sold him as a yearling. We ended up buying him back in the fall of 2018, and he has really done good things for our breeding program. We love the femininity of his heifer calves, and his bull calves are more consistent than our previous herdsire's, BB Uncle Tony. His dam (who is my avatar) is coming on 13 now, and is still phenotypically one of the nicest cows in our herd. General is by far the easiest keeping bull that we have had to date.

Gizmom- I completely agree with you assessment on Rio Grande. In our opinion, he is "good" but not the caliber of either Tony or General. We started to dig ourselves into a hole a few years ago by breeding too closely to Tony, as our frame scores were starting to get smaller than we would like. General has helped us turn that around though. I have an idea as to where I would like our herd to go in terms of phenotype and the combining of certain cow lines in the coming years, and I have to say that Rio Grande is not really a component of that plan. He is an outcross to Tony and out of one of our better cows, so we are using him over some older cows and half siblings to General for the interim until we raise a better replacement. I believe that some of this year's calves and current yearlings that we are retaining will be better than he is.
F

Love the guernsey cross as she would decent for house milking, but bred back to the MG would be a real nice beef calf. That is the best of a guernsey/beef cross that I have seen. Hope you get a good replacement to raise. I am assuming that you do milk her and that is the reason for going back guernsey.
I also really like the General and not the Rio Grande bull as much. But he might give you the outcross you need to go back with your Tony/General line. They might compliment each other.
General is a tank.... what are the average weights of his calves? I wonder what calves out of him on some of our Char cross cows would look like and grow? I am honestly tired of the black cattle syndrome... I like the MG's you have, and some of the red crossbred cattle we have. I want a good butt on my cattle and the black ones just don't have it around here. Have a couple of char crosses that have more butt than others.
OP

Farmerjan- She has been a great cow for us. Her bull calves in particular, when she is bred back to a Murray Grey, grow extraordinarily well and finish out beautifully. We milked her a few years ago, but would like to keep her line going for sentimental reasons. It has been a few years since we have needed to graft a calf onto her, but we like having that option as well. As for General, his bull calves averaged 80.8 lbs at birth and his heifer calves averaged 73.6 lbs at birth this past spring. They were all out of mature cows. I would be curious to see what he would do over a group of Charolais females.
T

We sure are pleased with our first General bull calf born here in Oregon. 88 lbs out of a big 3 year old cow. No issues calving and growing like a weed. AI'd General to 2 others- one heifer confirmed bred already and the other a cow was just bred last weekend. Planning on using him on one more heifer this spring.
T

TwoByrdsMG said:
We sure are pleased with our first General bull calf born here in Oregon. 88 lbs out of a big 3 year old cow. No issues calving and growing like a weed. AI'd General to 2 others- one heifer confirmed bred already and the other a cow was just bred last weekend. Planning on using him on one more heifer this spring.
Click to expand...

I thought that I would update this thread with some current pictures. We turned General out with the entire herd on June 1st. He had 6 cows in heat yesterday, so as you could imagine, he was quite busy. It is still too wet to mow or spray the sumpweed, but I am hoping that it will dry up down in the river bottoms in the next week or two.
101 Bull- 3 1/2 month old son of Cadella Park Golden Boy 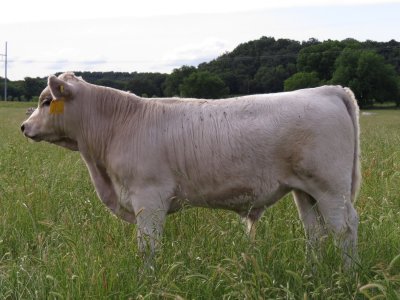 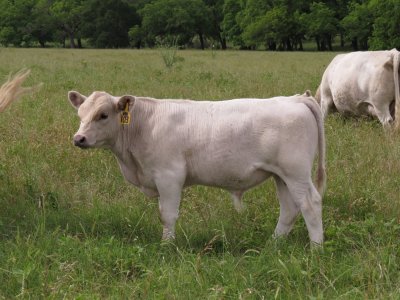 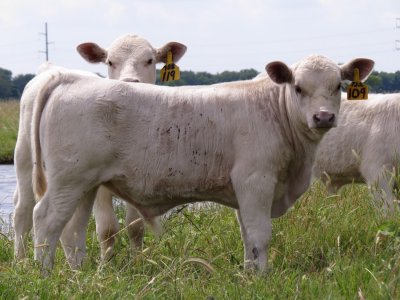 BB Poppy- This cow is quickly becoming one of my favorites. She is a 4 year old Tony daughter that is the dam of the 109 bull above. 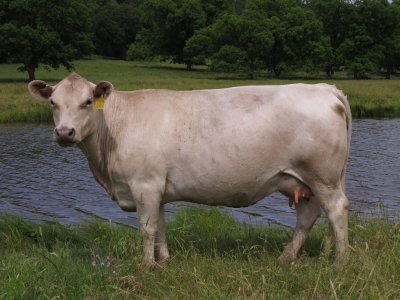 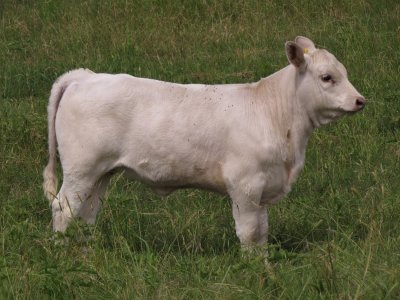 BB Trillium- A 2 year old 75% Murray Grey x 25% Angus daughter of BB Uncle Tony. She is bred to Rio Grande and due to calve this fall. 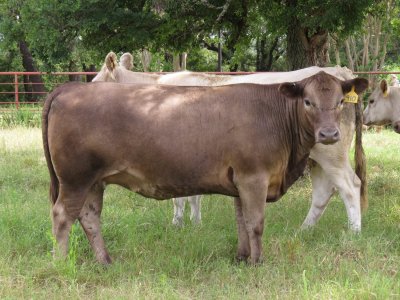 And this last photo is of BB Backbone's General a few days after we turned him out with the cows. 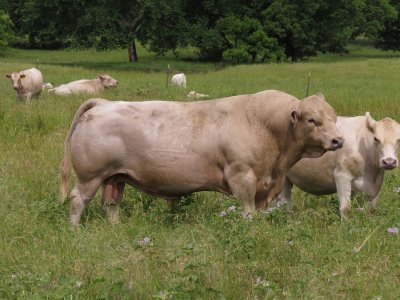 We are almost through the breeding season now, and our oldest calves are now pushing 5 months of age. We plan to wean them in late October- early November this year. Our bull, BB Backbone's General will be pulled from the cow herd on August 1st. He was turned out with 38 females, and is holding his weight well. I am hoping to use him for several more breeding seasons. 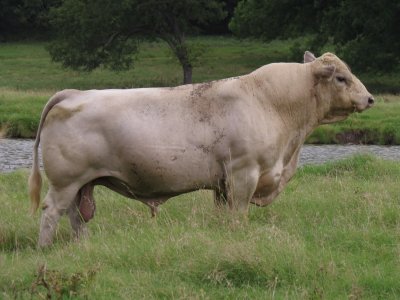 Two weeks ago, we castrated everything that we did not think were of bull quality, leaving us with 12 bull prospects. Seven are sons of General, and the others are sons of BB Uncle Tony and Cadella Park Golden Boy. Below are photos of a few of them.
101 Bull- Pictured here at 4 1/2 months 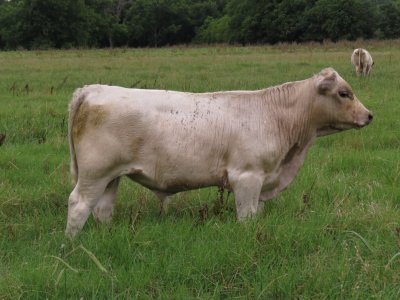 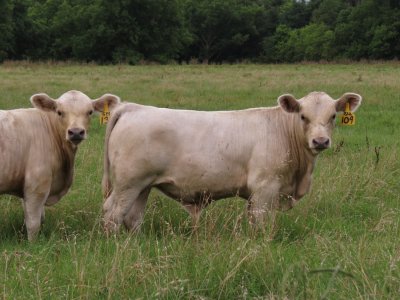 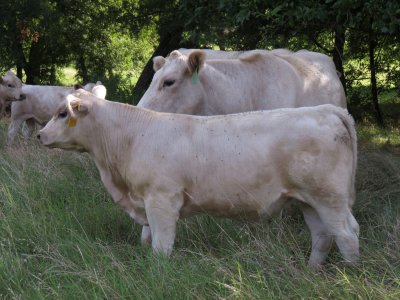 125 Bull- A General son out of a Cadella Park Golden Boy sired cow. He is pictured at 3 1/2 months here. 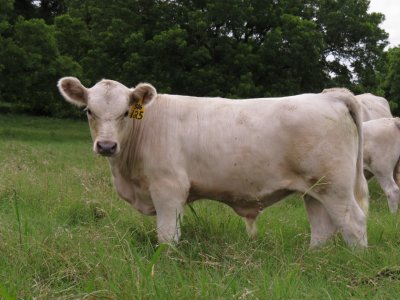 And these are two of our General daughters. We will be retaining both of them as replacements. The first is 3 1/2 months old and the other is a 4 month old. Her dam and sire are in the background. 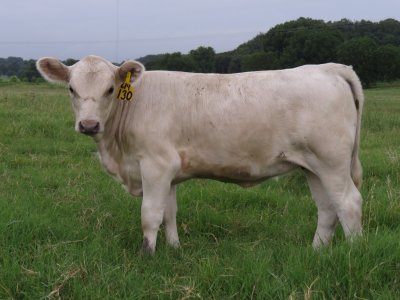 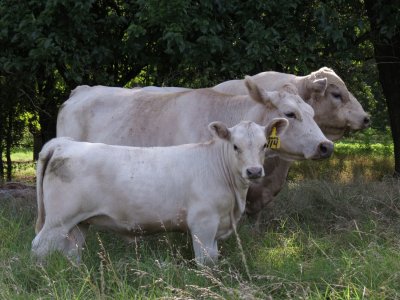 And these last photos show two heifers from our bred heifer group. They will be calving this fall. Both are daughters of BB Uncle Tony. They are a little over 2 years old currently. 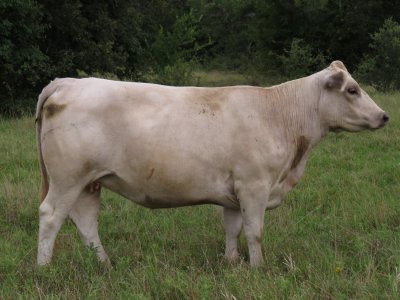 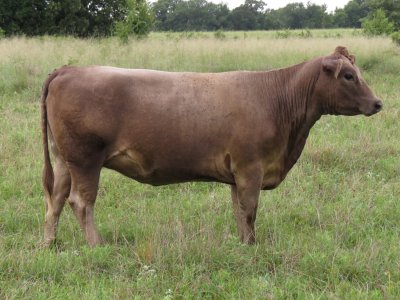