What was your first cell phone?
Mine was the Nokia 2110 and my did I feel like the bee's knees . The thing was like a brick :shock: 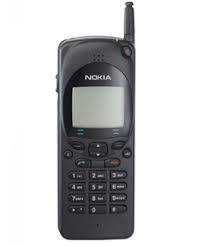 this was my first

My first one was a Motorola that filled nearly the whole trunk or the whole area behind the seat of my truck.
Next one was what we all called a Ranch Radio--looked kinda like a CB but utilized a small area network. You connected to an operator, and she dialed the number, once connected, it worked just as a regular phone. Mine had a standard black telephone handset.
Moved up from that to a bag phone. It was expensive to buy/lease and expensive to use too.

Southernlinc was the carrier. An indestructible phone too. I left it out in the rain twice. We had cb radios before that as well. A cobra 29 just like the picture in the truck and a cobra 2000 in the house. Both had a little help to go along with them.

The first one I bought was a bag phone for my wife's car when she was pregnant with our daughter, who will be 22 in April. No battery. It had to be plugged into the cigarette lighter.

As my father got older I encouraged him to get a cell phone since he was off by himself so often in tractors and checking cows, so he could call if he got in a bind. When his phone would go bad me, or my sister, or somebody, would have an old one that he'd take and have his number transferred to instead of getting a new one and signing a new contract. When he died in 2007 he was still on the original plan, paying $15.00 per month for 15 minutes.

Southernlinc was the carrier. An indestructible phone too. I left it out in the rain twice. We had cb radios before that as well. A cobra 29 just like the picture in the truck and a cobra 2000 in the house. Both had a little help to go along with them.

I used to shoot skip back to the states from Guantanamo Bay Cuba late at night. Talked as far as NY and as far west as Kansas. I was not barefoot. We had to watch what we said..had to say we were talking from Puerto Rico..cb radios or any other comm device that could reach off shore were 'illegal' in GTMO.
OP
OP

Had to Google 'bag phones'...never heard of them before

alison.. I think mine was the same or very similar .. y2k era

Can't remember exactly the make or model, I think it was a Motorola. The thing I do remember it was a brick, not convenient to carry or use. I loved my flip phone and kept it way too long, kids and wife and co workers made too many jokes at my expense so I upgraded.
W

I don't remember what my first phone was. I do remember it was with Cingular who later turned into AT&T. It wasn't my first but one of my favorites was an old Motorola phone I had that phone for a long time till it broke. I was sad when I found out they didn't have that model any more and I had to get something different.

alisonb":2v7eh74f said:
Had to Google 'bag phones'...never heard of them before
Click to expand...

LOL! We had one coveted bag phone at work for all the Implementation Engineers but I used it the most because my territory was the furthest.

I had a Motorola bag phone as well....1993. Not smart at all put probably the best phone I ever owned.

Had a big bag phone like M-5's. I was doing a lot of white water kayaking at the time and our son was small, so we put it in some water proof stuff and would take it kayaking, which, looking back, was kinda crazy. Although the $%^#! things are even more $$$ now, and hold less charge
W

I loved my bag phone. I would have one today if they were still available. They had a good loud ring and you could put them somewhere central to where you were working. Only drawback was the bag was good for putting other things like pens, nuts and bolts a notepad. I had to do a periodic clean out.

Where to buy new cell phone?
2