I'm sure many of you are following along.
This newest "bottle calf" wont take a bottle. Drinks about half from a pail/bucket, only if he has nothing else.
He nursed ONE TIME on Bessie and gave up on that idea too. I dyed her teats. Sorry. I should've taken pictures! Funny looking things anyway.
Bessie is plenty willing. I even shoved him under there and tried manually putting a teat in his mouth to no avail!
Crazy thing is... he eats grain and hay like no other orphan I've had.
He weighed 105lbs when I bought him.
I got to noticing his tail is quite long for his perceived age going by weight. And has quite the switch compared to my normal calves.
I figured he ain't nursing so I turned Bessie back out and the Thing 1,2 and 3 drained her.

Think he will make it on feed/hay and water?
Other thoughts..... 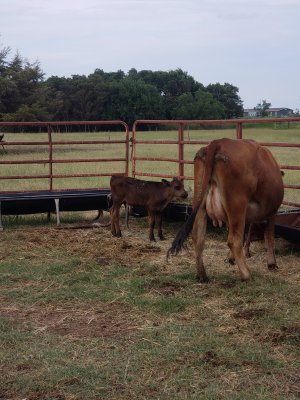 Here's an earlier pic with tail 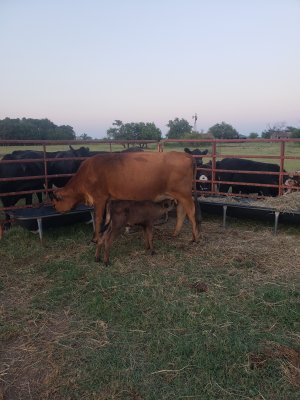 Pen him by himself so you can get some idea of how much he takes in. The rule of thumb for Holsteins is that they can wean if they eat 2 pounds of calf starter a day. He's smaller than that, so it might not even take that much.

If he wasn't bawling when you got him, he probably gave up on having a mother a while ago.
OP

Buck Randall said:
Pen him by himself so you can get some idea of how much he takes in. The rule of thumb for Holsteins is that they can wean if they eat 2 pounds of calf starter a day. He's smaller than that, so it might not even take that much.

If he wasn't bawling when you got him, he probably gave up on having a mother a while ago.
Click to expand...

Hes been bawling a bit for sure.
I have done just what u suggested. Hes penned seperate from Opal. I'll see how much feed hes consuming and hope for the best. Thought about sprinkling a scoop or so of milk replacer powder on his feed......

How old do you figure he is? I'm thinking a month or so?

My first preemie was orphaned at 9 weeks. Wouldn't take a bottle, drink out of a bucket and while I turned her out with the herd, I never saw her rob off another cow - nor did I see her with a milk face (doesn't mean it never happened). But baby girl loved her cubes! And she would graze along with the cows while the other calves bedded down. She's now 10, calves like clockwork, one of my best producers and you'd never know she was a preemie. And she still tracks me down like a bloodhound for extra cubes.

Maybe he just doesn't need it? I got nuthin'.
OP

Nesikep said:
How old do you figure he is? I'm thinking a month or so?
Click to expand...

Well, initially that's about what I was thinking. Makes me wonder tho. But the more I look at him, the more I wonder if he was a dink or something. Aside from his tail, I got no clue.
From now on I'll buy my own I think.... lol

Hes a nibbler!
Nibbles on feed.
Nibbles on hay.
Pokes his head thru the panels and nibbles on grass.

Idk, but we will keep trying


@TCRanch thanks for the reassurance! Maybe itll all work out..
OP

He ate about a pound of grain through the day. I gave him just over 2 lbs this morning. He easily ate half. I let Opal finish it up so I can give him some fresh shortly. And a new flake of fresh hay.

Hes out there laying down, chewing cud!
Honestly I'm at a loss as to what to think. Feed is cheaper than milk anyway I guess. 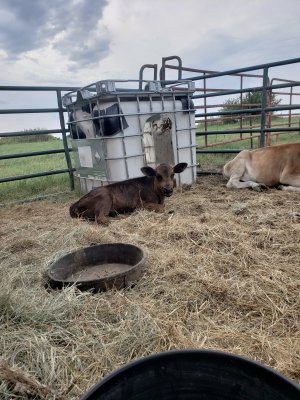 Gonna thoroughly clean pens this weekend so I can keep a better eye on hay consumption too. I'm still playing catch up from hay making. Havnt had a lot of time to work with Opal yet either. Just feeding n feeding.
H