Since I haven't posted about our Boers in a while, I thought I'd give an update. Since last fall, we've really been doing some big things. In November, we hosted the great Dr Fred Homeyer to lecture about 75 breeders in the area. He taught the history of the breed and conducted judging workshops. He's a wealth of knowledge and we were truly humbled to host him. I will try to find some pics of that weekend!

In January, we took 10 head to Denver. We've shown cattle there numerous times, but the goats were a first and it was the first time my daughter got to go to the NWSS. We were honored to bring home banners for best pair of does and for breeders herd.

Spring was uneventful, as Covid cancelled most of our plans.

We have continued to ultra sound scan for carcass merit and build our breed index (boer equivalent to EPDs, which we don't have). Several breeders are now contributing data to the index and it is gaining more attention across the US.

My sister judged a few smaller county fair shows. Plans to for her and myself become certified judges was put on hold by Covid.

This summer, our senior herd sire KMAR Get Back Jack was officially Enobled!

This fall, we hit a few shows and held our first online, nationally promoted doe and buck sale. We did all the clipping, picturing and videoing ourselves. It was a ton of work, but looked fantastic and the sale was narrated by Jason Brashear, a well known breeder and ABGA judge we deeply respect. We did very well and are planning next year's sale already.

Now we are getting ready to kid some does in November, another bigger group in January. Getting some inspections done to push another large chunk of our stock to Enoblement. Hopefully heading to Nebraska, Oklahoma and Texas in late January and February for a couple of big shows. Hopefully, COVID doesn't destroy those plans.... we miss being on the road showing and spending time with our friends on the circuit!

This is my daughter and a 3 month old buck she broke to show at NWSS. 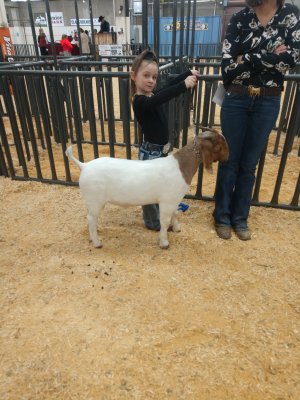 Daughter and niece on the catwalk in the yards. Had to be sure to get this shot, since the catwalk is only history now! 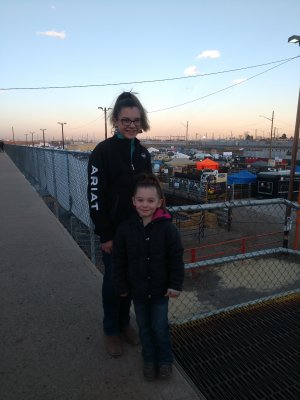 This is a young doe we took that was very competitive. 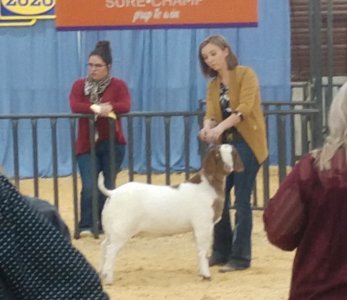 This is a young buck we sold 1/2 interest on in our sale. He's really doing well and racking up titles with limited showing. 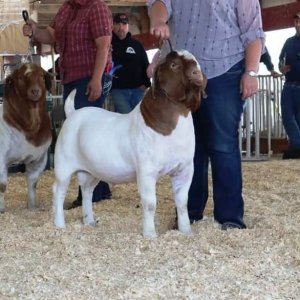 This is a doe we sold for super cheap as a baby. Needless to say, we had to get her bought back. She's been wining a bit this fall and earned enough points to push her dam to Enoblement! 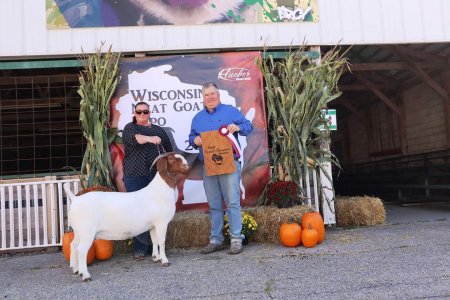 My daughter working her show goats. 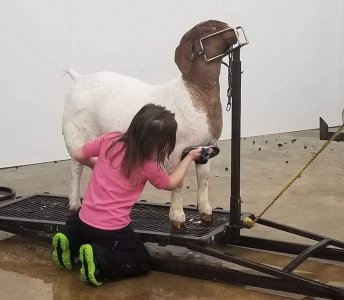 Hard at work lol! He's 2 1/2 by the way and closing in on his own Enoblement. 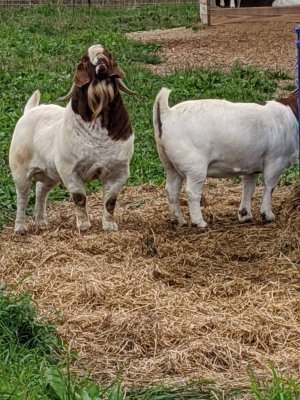 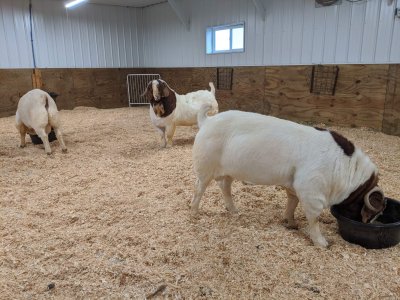 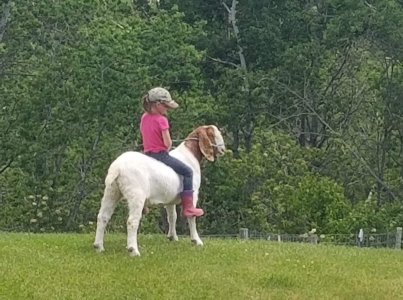 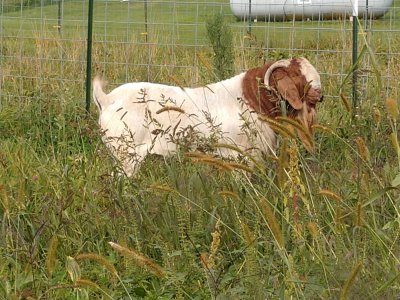 Some of the does during spring kidding. 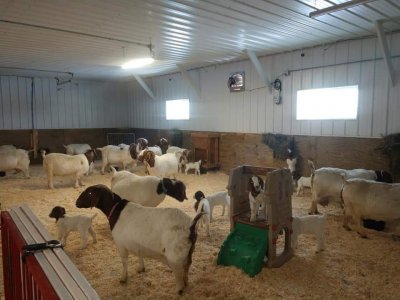 Very nice stock, I used Boer goats for scrub control from the 70's with about 300 does, but never got into showing. When we first came to the UK I started a small herd again and was building up interest in clearing invasive trees such as willow and elder, but sold up when we moved to the USA. (We always call them Boer goats or Boer bokke (Afrikaans) as "Boer" means farmer or an Afrikaans person).
P

Nice goats. I had some boers when I was a teenager. None of them was that nice!
OP

A couple senior does. The one on the right is 10 and bred for next month. 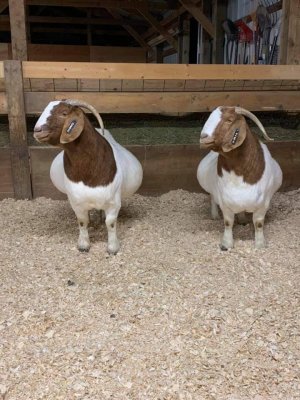 Article written by Dr Homeyer on our symposium. He's done a couple on our program and my one sister (she a true asset to the boer industry). Always exiting when someone so renowned takes interest in a project! 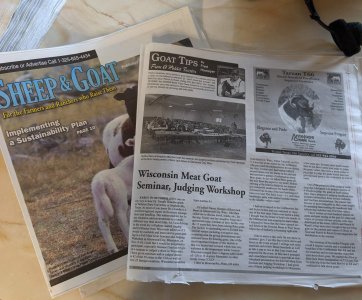 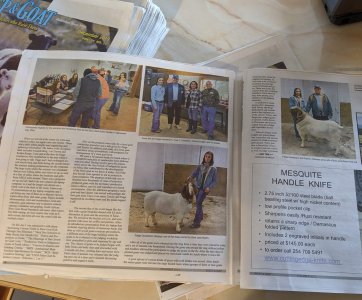 Our NWSS banners. Probably one of our most cherished accomplishments to date... 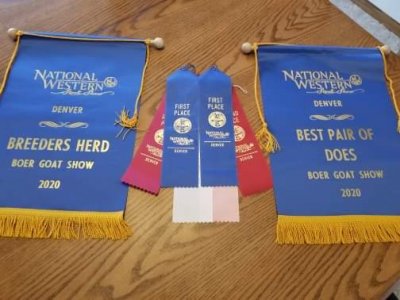 And finally, another picture my sister snagged of Danny. I call it "waiting on the rain" 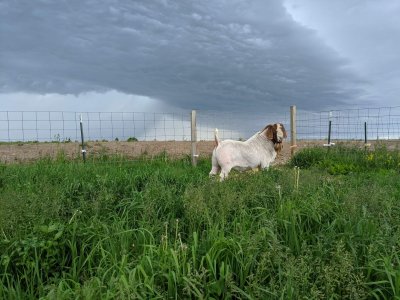 These pics make me wish I would have started showing and breeding show stock when I was a kid. Great pics and great looking animals.
W

They certainly look like they got a bit of meat on them.

wbvs58 said:
They certainly look like they got a bit of meat on them.

They do! We believe they should hang a good carcass, as well as look spectacular on the hoof. That's the reason we scan all kids at 6 months and a large part of the index we built. There is a serious lack of true carcass merit in the breed as a whole right now in this country. For example, industry standard on rib eye is about 2.5. That's a small *ss chop for a meat animal! The one young buck I posted, Baby Shark, scanned at 5+..... Combined with his phenomenal back/rack length, tight hide and overall hardiness, makes him one I would but up against any of the so called "wether bucks" out there to produce really high quality carcasses in his offspring, all while being a purebred Boer.
You must log in or register to reply here.
Share:
Facebook Twitter Reddit Pinterest Tumblr WhatsApp Email Share Link