Hi, thought I'd start a thread where anyone can tell about their experience /experiences raising bottle calves. How you did it? What you would do different? And are you courently raising any?

I got 2!
Neighbor boys have the 3rd.
They are enjoying the heck out of him.
I'm gonna update my bottle calf thread on him shortly.
OP
H

Thank you for responding to my thread! I'm hoping people will put basically their life story on bottle calves on here lol.
OP
H

My bottle calf story starts with a horse... I sold my horse in 2014 for $400, bought my First bottle calf for $350. He was all Holstien and he was so sick a friend of mine thought he would be dead the next morning, he wouldn't take a bottle so I dumped 2 well beat raw eggs down him and the next morning his poop looked better and he sucked down 3/4 of a bottle, he didn't get sick again. at 6 months old he weighed 400 and brought $634. I was hooked, so I raised a jersey heifer and for the next few years I raised 6 to 15 bottle calves a year. 2 year's ago I lost my first bottle calf, I only bought him so the guys kids wouldn't have to watch him die. Then (this year) I lost 2 $50 beef auction calves that looked like death walking, they were skinny and looked Horrible. Then sometime in there I had to put a calf down that had been stepped on at birth, but I don't really count him as me losing, him because it was the only thing to do for him per vets advice. Then this year I had 70 bottle calves. I currently have 4 on the bottle 2 on my nurse cow. I have a contract with a Brown Swiss Dairy to buy All of their Bull Bottle Calves. Brown Swiss calves are Huge!..! The small ones are 80 at 4 days old, the big ones are over a 100 at 4 days old.. I had to put 2 of these brown Swiss calves down, 1 due to neurological issues the guy gave him to me. The other one due to he choked on milk, wouldn't cough and he was suffering and about dead from having milk in his lungs. I have fed 90% my calves on my jersey milk the rest on Milk Replacer. Bottle Calves are Fun but a Lot of work!!

I used to raise dairy calves. Some on bottles and used nurse cows for a few years too. Had a couple dairy’s that I got most of my calves from, usually had 80-100+ a year. It was a learning process for sure. Now both of those dairy’s are not milking and I quit calves when they did, as the stockyards and calf traders are pretty risky sources for baby calves.
I started back running stockers for a while, then started building up a beef cow herd again. Usually end up with a bottle calf or two a year from some situations from the cows. This year we have had more than usual, due to buying some older cows last year and calving out several purchased heifers. Currently have four on the bottle. This is the oldest 3 haven’t gotten a picture of the fourth one, and the dog is extremely jealous of the calves 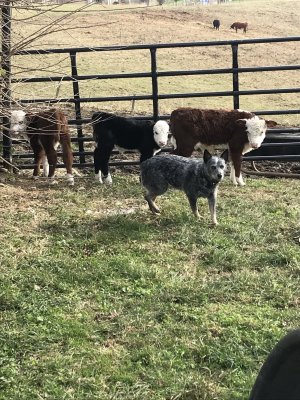 Ok I'll try..
My first bottle calf was a friend/neighbors that for whatever reason they didnt wanna fool with. If I remember right she was a twin. Heifer calf did great!
Got her up and weaned off milk. Eating grain and grass. (Warm season calf)
She went back to her home with instructions that she NEEDED grain daily for at least 2 months still. Out to pasture she went and she died. Communication. Or lack thereof I guess.
I did buy one to raise on the bottle, but had a heifer lose a calf in birth. So that mama raised it.
Somehow I ended up with another. Made a deal for half a beef in trade for raising her. She did great too! She stayed here until she was a good ruminating ruminator. She went on the wheat later and as far as I know she went to work for the restaurant industry.

That pretty much brings me up to the start of my bottle calf thread....

Here's one of the first ones I raised. Cruise night...
Good times! Good times!

Just b4 cruise night. Had to take her to my city bros house for the niece to see.

She was my favorite!

Thank you for responding to my thread! Those are Nice looking calves!

I've done several over the years, pain in the butt too, takes a lot of time I should be doing more serious stuff. Sure fall in love with them quickly tho!
D

My Dad gave me a day old Holstein bull calf when I was 8 years old. That was 61 years ago. I have raised a lot of them since then. The most I have had at any one time was 18. That would have been in the early 70's. In the 90's I got Holstein bull calves from a dairy that had been 100% AI for several decades. I kept track of the AI sires of those calves. I raised the up to 1,000 pounds and sold them to dairies for breeding bulls. At that time I had 6 calf hutches that I kept full all the time. Presently with the high cost of milk replacer and the low value of dairy steers I wouldn't consider raising bottle calves with the exception of those very few beef calves born here that require bottle feeding for some reason.
OP
H

I could sell several of the calves that I get from the dairy as breeding stock , except they're all banded before I get them. I have had several people who say they are only interested in them as bulls to use on their cows. I enjoy feeding bottle calves. I guess I'm addicted to it lol
Share:
Facebook Twitter Reddit Pinterest Tumblr WhatsApp Email Share Link