I have a rent pasture on Highway 6, which is a 4-lane divided highway connecting Houston with Bryan/College Station and Waco, and carries a lot of traffic. There's something with the spot by my pasture that seems to be making people run off the road and through my fence. It's only about 40 acres, but it's not unusual to have to patch fence there several times per year. So last night when my phone rang, and I saw it was the owner (a cousin who lives an hour away), and it had been raining all day, I didn't have a warm fuzzy feeling.

Sure enough, it had happened again. So my son and I loaded up and went over there. I just love fixing fence in the dark while it's raining. I went back this morning when I could see and finished up the fence. Oddly enough, the guy had drove through the fence, then across about 250 feet of open pasture, without a single skid mark, and then into a heavily wooded deep gully and hit a hackberry tree on the opposite side as big around as the top of my leg hard enough to break it off. You can see the tree on the far left. Somehow he wasn't hurt. I don't know how they'll ever get that car out. I sent this picture to my cousin, and he said he might have to use the car for a deer stand. 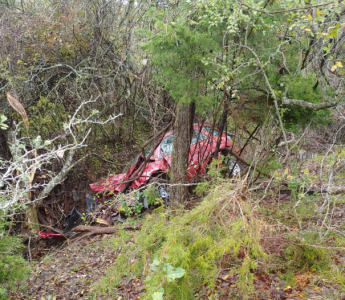 Sorry you have to deal with that. We have the same problem. We are on a two lane state highway, that is up and down hills and one curve right after another. There’s a few hundred feet of a straight stretch coming out of a curve and we have four or five a year on average run out the road and through the fence.

That's crazy. What are you going to charge for fence repair and storage fees?
L

That looks like 'hardtack ground'! If he had died it would have been from Covid,,,,

That must have been one he!! of a ride!
We have pasture on both sides of a high way that has a double S curve in it. I feel your pain.

I'm glad I have to drive 20 miles to see pavement.
OP

Silver said:
That's crazy. What are you going to charge for fence repair and storage fees?
Click to expand...

I haven't decided yet, but I'm leaning toward a couple hundred.
W

That car looks a bit compressed.

I drive Highway 6 a lot, but I'm on the north side of BCS.
D

Some one ran through the neighbors fence. No cows got out and the neighbor didn't even notice it for a day or two. That is because at that particular site the fence is at the bottom of a 20 foot bank that is nearly vertical. Looking at that location and the tire tracks it is hard to figure out how they managed to keep the vehicle with the rubber side down. Who ever it was drove down the fence to a gate, let them self out, and shut the gate. This is on a gravel road that is a long ways to a very few ranches.
OP

Dusty Britches said:
Do you think alcohol might have been involved?

I drive Highway 6 a lot, but I'm on the north side of BCS.
Click to expand...