Got another one that don't belong here.

Sat night, a neighbor up the road called and said the Constable was wanting my Ph# because "there was a steer out on the highway" and my place is the only one near that has cattle. I have sold all my cows but they and some more are still here on a lease basis, so I (finally) got in touch with the owner and he went out and found all his still in the 105 acres that make up his total lease area. (I knew he had no steers so figured it was a bull calf anyway) As they were following him back to his truck, another one came running by him that he didn't recognize so now there's an illegal alien here on property that so far, no one has come looking for.

All I could do Sunday morning, was lock the whole 29 head up on the 12 acres closest to my house till the new guy settled in. I called the constable and let him know, but had to leave a message. Still haven't heard back from him but there's enough grass for that many only for about a week and I don't want to risk the squatter calf getting back out on the road, since I'm pretty sure NewGuy got in on what used to be my brother's property adjacent to me.
I found out a little more about the animal yesterday afternoon. Someone had hit the calf coming off the river bridge but didn't damage their truck and the calf ran off into the woods, but the driver did call it in to the constable or SD. I can still see the glue on it's hips from salebarn sticker so I assume someone bought it recently as a trailer weaned calf and it escaped looking for it's momma. The mottle faced one. I've put out the word locally that he's here but nothing heard. 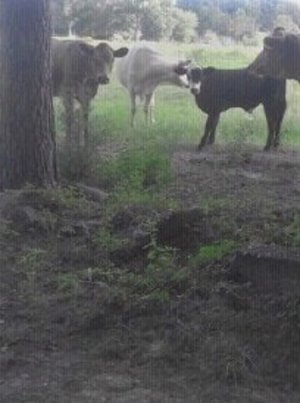 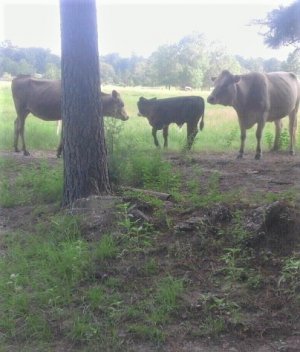 Irritates me some that;
1. The county expects ya to do the right thing but you can't get in touch with them for them to then do their part.
2. The SD & constable also has turned over ALL animal control issues to an animal control officer, but he's off until Tuesday and his phone mailbox is full and you can't even leave a message.

Least he looks happy with himself!

greybeard said:
Irritates me some that;
1. The county expects ya to do the right thing but you can't get in touch with them for them to then do their part.
2. The SD & constable also has turned over ALL animal control issues to an animal control officer, but he's off until Tuesday and his phone mailbox is full and you can't even leave a message.
Click to expand...

That's about how it is here. Apparently a lot of things that traditionally have fallen into the category of SD jurisdiction are no longer in their job description. As more and more of them from the top down have no experience with agriculture or livestock, it kind of leaves you on your own when a problem arises. The animal control here doesn't do anything except manage the animal shelter from what I can tell. A situation a few years ago, had the SD and the animal control each passing it off as the other's jurisdiction.
I've never figured out what the constable position does except give a few folks a title

Had a 32 ft trailer from the neighbor show up with a crazy cow on it Saturday. Guy was looking or the owner. I explained to him that the cow was actually his and she just grew up on my place.

A lot of people on here would have a coronary if they moved here. Right now there is an old crippled cow out in my front hay meadow and on Saturday I saw 6 or 7 pairs on the west end of my place. Last I knew my cows are on a place about 10 miles from here but I haven't seen them a several months. They will all end up where they belong eventually.

Got a call at midnight Friday that the county deputy had seen a black and white calf in the road. I slept through my phone ringing, so I heard the message the next morning. Found the cows up for water Saturday evening. Had two extras. Yearling heifers, one blk & wht with some ear, and the other all blk with 5" horns. Defiantly not ours. Talked to the owner Sunday. He said the officer was nice enough to let them in to our pasture. Glad they got then off the road, but just pasted the problem on to us. The owner has a bad reputation for poor fences and a small place. He's raising these to butcher. This is the third time I know of that they have been out this summer. They're staying in with our cows for a while. They're not hurting a thing and its going to be in the 90's with out the humidity for the next week. We made it very clear that we were not rounding up our cows in the heat. His hfrs will stay off the road in our pasture.
Share:
Facebook Twitter Reddit Pinterest Tumblr WhatsApp Email Share Link