lookin to get priefert cattle sweep...premier open would probably work ....I only have 60 head to work anyone got one .?.....and would the rough stock be worth the extra money? know it is heavier made....was wondering if bull could bend the premier?
D

I don't live in Priefert country so don't know much about the brand. What I do know is the secret to making a sweep work good is to not over load it. A few cattle at a time will work faster than packing it. A sheeted tub will work better than an open on. On an open tub you can hang a canvass tarp (I wouldn't use plastic) on the outside to the get the same effect as one that is sheeted. It causes them to see the alley as a way out. I got a material used in pulp mills called dryer felt. To hang on mine. It looks like a canvass tarp with metal woven into it. It lasts a long long time.
OP
G

thank you for the input....I agree
B

I have the Priefert Premier sweep system and I believe it works well. I have tigerstripe cows that can be a little rambunctious at times and it has never been bent or failed. B
L

I’ve got a P&C corral sweep (at least I think that’s the name). Works really good. Like has been said above just don’t overload it and give them some room. I run 5 at a time through it.

NOT overloading is the key to smooth cattle working that many professional cattlemen choose to disregard....fewer is faster and slower is faster and quieter is normally faster....
the easiest way to eat an elephant is one bite at a time....
B

I have that open tub. We only have 20-25 pairs, and it works ok for us. It's designed to be portable, but there are some downsides to that. It is not as rigid as I would like sometimes, and I don't like the support pipe that sits on the ground where the cattle are. They can get slick after being pooped on. The latch system is ok. I had a weld break on the center support, but priefert repaired it at no charge. I also hang tarps on mine to keep the cattle more focused on going out the alley. If I 60 head, I'd be tempted to get a solid sided tub that's more permanent.
B

The alley on the rough stock is 4" wider than the premier. Some of our fatter cows sure don't like the narrow alley of the premier.

I have one. 90degree, just like in the video below, but I can tell you, those cows have been worked in that sweep or one like it lots of times. It works ok with my beefmasters and CharX cows and I have not had any trouble with the sweep itself, or anything 'downstream' from the sweep area. All my problems come in the holding area right before the sweep.
I like the chain together aspect because it more easily allows setup on uneven ground, but I use a 24" long pointed bar to pull the chains tight.
Can a big bull or momma cow bend the panels? Yes. I shipped a lazy BM bull that weighed about 1600lbs a few years ago because of low libido and had him penned overnight with one cow. She came in heat the night after that same afternoon I penned them and she wanted nothing to do with him..evidently preferred the Char/sim bull I had at the time. go figure.. When I put him in the holding area ahead of the sweep, he picked that minute to summon up some testosterone and turn into a bull and ran 3 of us out of the holding pen ahead of the sweep, bent out some of the panels in the holding pen but once inside the sweep, gave us no more trouble loading.

Watch about .35 seconds into the video and you will see this: 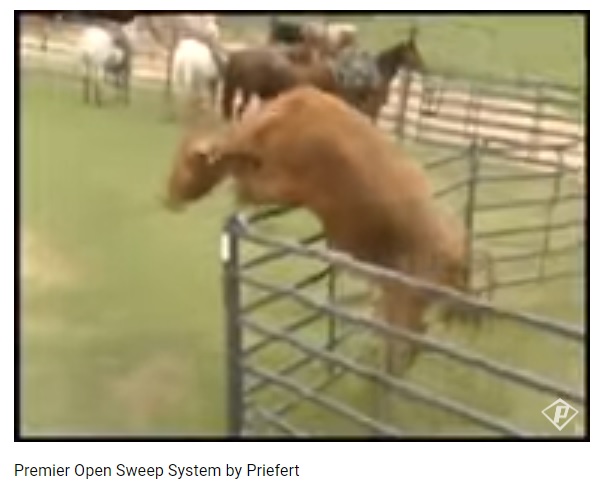 After the guy spooks the cow down off the panel you can see the panel has bent, but I'm not sure other brand panels wouldn't do the same. 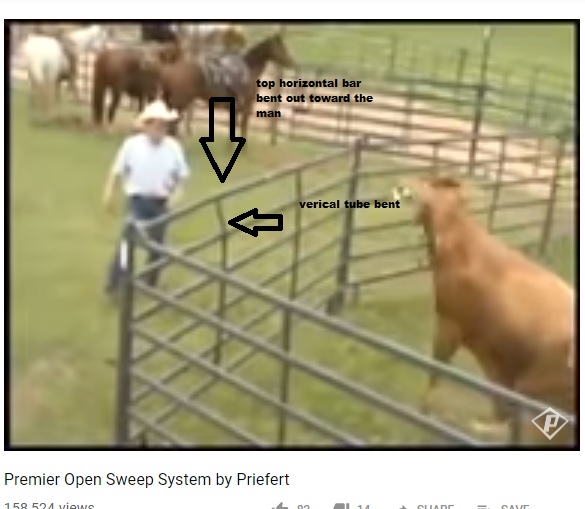 I've seen some (brand unknown) sweeps and panels that really turned into a wreck with less abuse than what is seen in that video.

I started with their basic 90deg sweep and 12' long alley and built around it, lengthening the alley to 22' long with a Preifert sorting gate and a 45 deg turn, so I could choose whether to send them down to the headgate/squeeze, release them out of the alley, or send them to load out. It's worked well for me but I rarely ever have more than 40 hd total at any given time, usually between 25-32 head, calves not included.
I try to work only 10--15 at a time.
some calves I was getting ready to vaccinate a year or so ago..and how I have it set up. 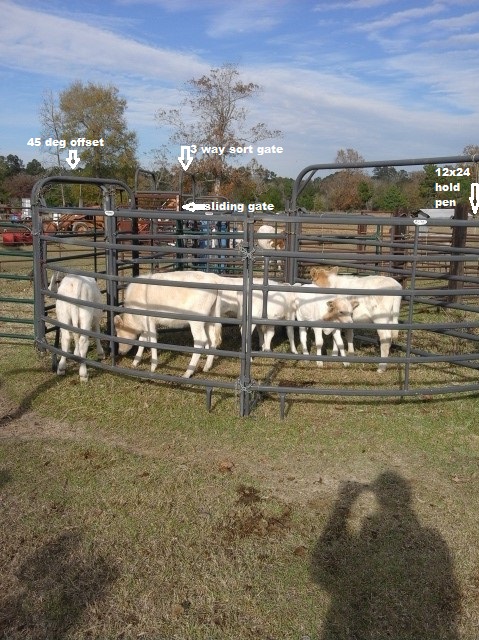