I NEEDED THAT CALF! Lol
OP

MurraysMutts said:
I have that same picture!
I was told she brought 1400 and the calf was like 30 lbs!View attachment 7094a friend was there and he bought a couple pair that were PO'd.
Like 1400 pr
3 and 4 yr olds

That is awesum!lol. I was going by memory and didnt take notes so its possible i was off on the amount, though for some reason i had the $1100 stuck in my head.haha. i got a cpl more of the little thing. 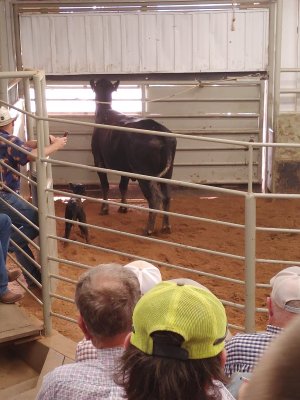 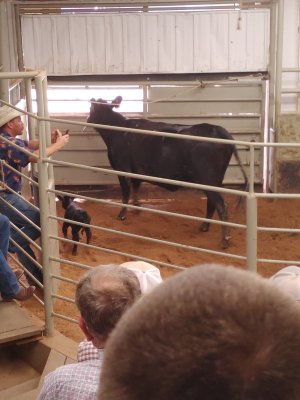 There were a few cows in a feisty mood yesterday evening. All but one that i remember had a calf so not surprised.

They sell there better than here. I guess more buyers.

Gosh that calf IS tiny!

Bet that was a twin
OP

They brot it into the ring carrying it.lol auctioneer said if he was calf, this is what he would look like.

It was HOT there in Fairview. Everyone was melting except a few of the gals.haha
They did sell a cow w a set of twins tho. 3 bwf pairs and they upped one pair by $200 in that group. They went for around 2k.
OP

jltrent said:
They sell there better than here. I guess more buyers.
Click to expand...