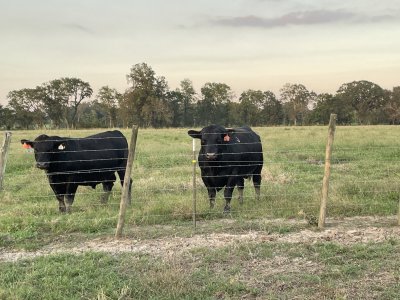 Nice bulls! Do they have better scrotal measurements than in the past? I know that used to be a negative when discussing Gardiner bulls.
K

They shouldn't get out!
W

Tell us more about them.

That’s your classic Alpha male on the right and Beta male on the left. Alpha has very high libido. Beta is right there to pickup the ugly chick. They covered 42 last year with only one open cow.

I like the docility of Gardiner bulls. We have an SAV bull, a Rainfall son. We AI’d 200 to SAV Rainfall and President, too. The growth is a little better with SAV, but you get some wild stuff from Charlotte.

I don’t know about the scrotal. We used a Gardiner bull with giant ones on five cows and four came up open. No libido. Some are really good, some are not as good. You don’t know till the fish scent hits the air and dirt starts flying everywhere…
W

I was never a fan of Gardiner bulls because in their catalog (it has been a few years ago) they were bragging about 85% of their bulls were ET. This tells me that the female production is questionable, and they really don't know if any or all of those doner cows can actually raise a calf. Most calves were raised by a surrogate recip cow. Also, everything at that time was fixated on single trait line breeding, based entirely on carcass epds. I'm not opposed to a certain amount of line breeding, as long as it is not real close breeding, but if you focus only on line breeding one or two "desirable" traits, you can also be linebreeding one or two "undesirable" traits as well. Many of the "carcass trait" bulls of a few years ago, were also small scrotal bulls. A comparison of those traits in an older ABS semen catalog is a quick way to look at that. (A notable exception to that rule was VDAR New Trend 315. Good carcass traits and large scrotal).
OP
J

In general you get decent maternal traits out of what Gardiner is producing when crossed with Brahman or Brahman percentage cattle. They clean up teats and udders. The heifers are easy to handle in a chute. But that operation has a bull for every reason.
W

The cross breeding would make sense. I would think the brangus, or brahma cattle would probably fill some maternal gaps. I raise registered Angus, so I try to stay within maternal sire groups that fit Wyoming, and a high desert climate. I have always thought that maternal characteristics were one of the big pluses of angus cattle. There are other breeds that do certain other characteristics better than angus. Thirty years ago, I was running a rainbow herd with all kinds of different breeds. I wouldn't trade trade those experiences with other breeds for anything. I think it made my own breeding philosophies a little more well rounded.
OP
J 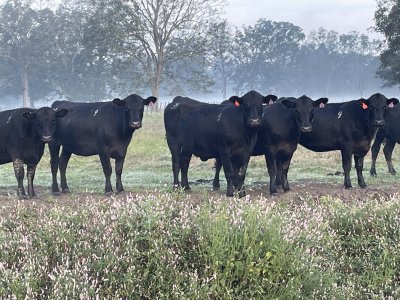 That is what a heifer should look like if she has never touched grain. Yes, we feed them a high protein (12-15%) silage but no grain. Right now they are cleaning up pasture before I rail it, rake it, and plant rye grass with the broadcast spreader. When they calve they go straight to rye grass pastures. So when you see these butterball dumplings that are supposed to be grass only, well… Those girls are a group of 20 on 50 acres with PLENTY to eat.
OP
J 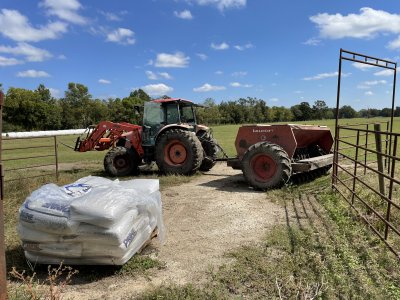 B
Some eastern Red Angus Bulls