Few random calf pics from this spring. Grass is in now and they are gaining real well. Momma's are fat as ticks. Love that green grass

Yes it is TC a heifer and I'm with you... gorgeous
P

My gang this year minus one bottle calf.
View attachment IMG_0101.MOV
R

Couple of silvers. Still feeding but letting them pick about 30acres too. Finally got rain today so hopefully we can haul them out next weekend. 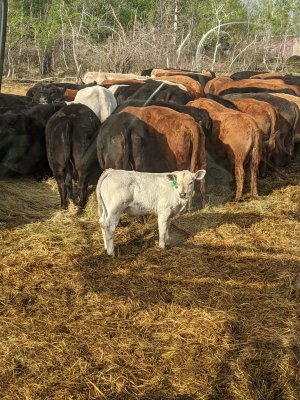 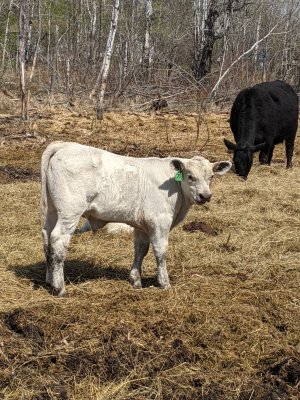 Those calves are really popping. Nice. 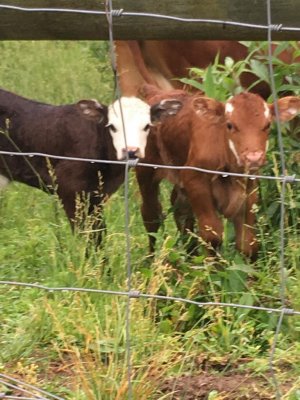 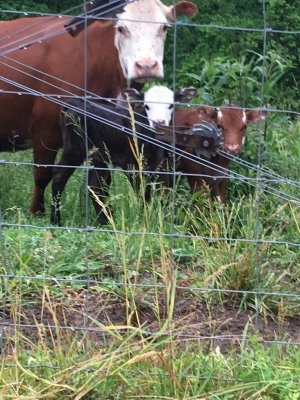 She is a good mama!!

Okay, gonna throw this one out. This is Bart, named after a local radio station's mascot, Bart The Radio Bovine (who gets out all the time and they live stream his capture - small community entertainment). Anyway, Bart was born during the epic cold, 5 weeks early but amazingly, still a huge bull calf. Tagged (including name on the tag), Inforce 3 & First Defense day 1 and watched closely to make sure he was okay. All good! Except, couple days later . . . . where's his junk? Ummm, clearly, when he/she was born and I glanced underneath, I was looking at the big ol' furry navel. And I'll be damned if I'm taking off my gloves to cop a feel when it's -10. Fail!!!! So, Bart's a heifer. But she's butt ugly and a big strappin' farm gal, so she's keeping her name. Worse yet: I'm probably gonna keep her as a replacement because she comes from an awesome lineage. 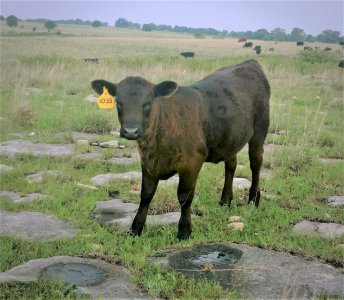 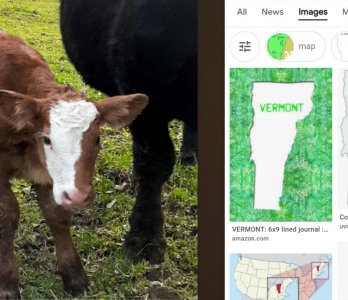 What should we name this girl?

Nice looking calves everyone! Will be late August before we have some on the ground.

What should we name this girl?
Click to expand...

Phantom! After Phantom of the Opera. I have a Simm/Angus with similar markings (but black) and that's what I named her 10 years ago.

What should we name this girl?
Click to expand...

Name her Mississippi for s&g!

SPH said:
Hope we get some rain soon, haven't had enough moisture and warm days here yet to get the pastures greened up enough to turn the cows out on. Some pictures from the other weekend of a few calves and a few bonus pics of some yearling heifers since 2 of them are full sisters to a couple of these baby calves

First 3 are of the same bull calf by of a Revolution son that we raised. This is the 2nd year we've had a few calves by him, another Hereford breeder in the state owns full possession of the bull now but we retained in-herd AI use of him and excited to see what his calves look like for them as we really like the few we have had out of him.

Heifer calf by the same bull, picture of her full sister later in this post...

SHF York 19H Y02 bull calf out of a first calf Revolution 4R daughter. We are going to use a lot more of York in our AI program this year

Revolution 4R heifer, picture of her full sister below as well too...

Bull calf out of our Rausch Puckster III herd sire.

I know these aren't technically calves but they are some of last year's calves and really happy with how they turned out.

Top yearling heifer out of a 1st calf heifer. Full sister to the 51C heifer calf above

Revolution heifer, full sister to the 56C heifer above

Those 2 side by side

Got a random "like" on this post the other day that I posted 6 years ago so figured I should update what happened with all these.

1. Eventually sold that bull as a yearling to a breeder that had bought some heifers from us previously. They were pleased with the calves they got but the husband died of a massive heart attack a year or so later and his kids eventually sold off the herd so not sure what happened to the bull but guess he probably went to the sale barn.
2 & 3. Cow came up open after her next calf so we culled her
4. Retained her as a replacement female, sold a heifer and a bull of hers and have a daughter in herd then had to cull when she came up open after a drought year
5. sold that bull as a yearling to a commercial breeder
6. retained as a replacement female but eventually culled her
7. sold the bull calf to a commercial breeder and eventually sold the cow to another Hereford breeder when we had to reduce our herd
8. This heifer turned into one of our best cows and is still in our herd today. She is 7 years old now, sold her 2020 bull calf to a repeat customer and she probably has the best bull calf in our 2021 calf crop.
9. see comment number 6
10. see comment 8. Sold the 81B female as part of our herd reduction after 4 calves for us but we did sell one of her yearling bulls to a commercial breeder
11. her 1st calf is our current herd sire who is 5 years old that we are selling semen on as an non-certificate AI sire and really pleased with the results we are getting from him. His first steer calves we sent to a feedlot made him the top profit sire of the group of steers and we've been selling bulls and daughters private treaty so she's been right up there with the 87B cow in #8 as being a productive cow for us.

This bull calf is one of my favorites this year. He was born on March 22 at 78 lbs. His mother has been a great producer for us so far, and I am looking forward to how this one will develop. 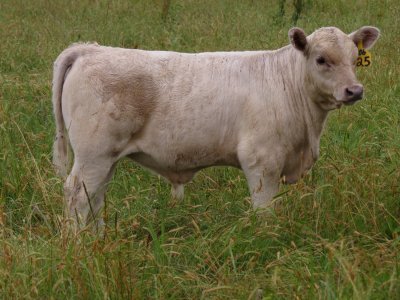 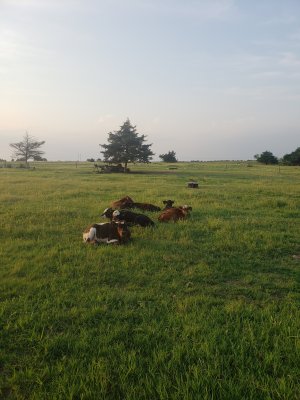 Oops baby is growing, was feeding him a bottle for a while and now he doesn't want it anymore 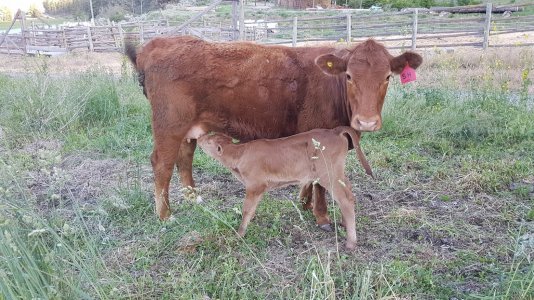