Another thread from beyond the grave.

Local guys got together and bought a few FB Chi bulls back in the 80s and tried that cross. They haven't seen one in about 20-years because they weren't brave enough to try it again.
Click to expand...

Negative, Ghost Rider. I have had several Brahma x Chi and Chi X Brahma cows in the past, and they were as gentle and easy to work as any Hereford or Shorthorn there is. And, they were AWSOME baby-raising machines! I met a client in the late 90's that bred and showed draft horses in competition. He also showed a team of oxen. Half Chi and half Holstein. He kept about 5 Holstein cows he'd AI to a Chi bull, and about 5 Chi cows he AI'ed to Holstein bulls, in order to get some of these steers. After I met him, I got to buying the heifers out of these crosses, and they were gentle as could be as well. Bred them to Brangus, and they were also calf-raising machines. About 1999, he took a notice to try to raise bucking bulls, and set about developing his own "breed": A 3-way cross of Longhorn, Brahman and Chianina. He bought a young Chi bull at that time, because it was hard for him to move the Longhorns through the working facilities he had to AI. You could lead that bull around like a lead-line pony.

Starting about '02 or '03. he started selling off his 2-way cross cows and heifers, as he built up his herd of 3-way cows. I would find buyers for him, but I bought the white Br X Chi cows for myself. ( He had used some red Brahmas in this program as well, but I sold those cows down in Florida) ) Nothing takes the leather off of a Brahma cross like a Chianina does. Those F1s, as far as leather and ear, looked more like 1/4th Brahma. Those cows would stand out in the middle of a field in mid-July at noon, and eat like it was their last meal. They were excellent mothers, had plenty of milk, and not a wild hair on them. I could ride right up to their day-old calves, get off and tag ( and band the bull calves) and they never got aggressive.

Supposedly "wild" or "dangerous" cattle...I have found.. are 90% a result of how they are handled and the ignorance of their owners/ managers.

johnny boulevard said:
Howdy , here is what it is : I am from NYC I moved to Texas to come out with a new breed of beef . I have raised and shown horses on Long Island and also sold feed ect. The Chianina is the cow I would like to perchas the sire will remain anonymous I ain't talkin , I rented a ranch just need pure blood full blood Chianina heff deal Ha ! I've been doing stuff like this my whole life , life's a blast with good success
Click to expand...

How many do you need, Johnny?
C

Fed some Fullbloods out in the early 90s. Got them cheap. Bat sheet crazy all of them. Tried to jump 10 foot frost fence. Couldn’t be worked. Owner showed regularly. He dispersed and I bought the last 6 steers he had left over which were off aged. They took forever to fatten they were so high strung. Stay far away
F

Neighbor tried them in SW MT. I say 'tried' for a reason. Man, could the jump!! Tore out part of his new, tall, stout corral too. Didn't take long for him to get weaned of his idea of using Chi for a cross on his Angus cows.

When I hear of Chianina I remember this. We went to a place to look at a horse. There was a RR boxcar there. The old boy who owned the horse was a real character. He told us, "just a minute, I have to let Buster out." He goes over to that boxcar and opened the door. This big, WHITE CHIANINA BULL just came waltzing out. His back touched the top of the door frame, he was that tall. He went down the steps and moseyed away.

We never did know how that old guy got that bull in that boxcar, but that memory is stuck in my mind forever.

I just looked at the Chianina Association website. It looks like they are crossbreeding with Angus to breed Chiangus. Pretty soon every darn cow in the world will be black!

They need crossed with something. Big crazy fools that don't give a pint of milk at a feeding time. A neighbor bought a angus bull from this place that had part Chianina in him.

Look at a pic of this bull, he could jump over a cow. 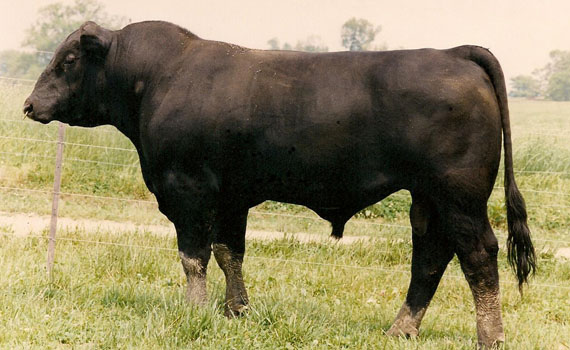 jltrent said:
The need crossed with something. Big crazy fools that don't give a pint of milk at a feeding time. A neighbor bought a angus bull from this place that had part Chiangus in him.

Look at a pic of this bull, heck he could jump over a cow.

Had my fill of those things back in the 1980's. We had a feedlot and one those chi-angus bastards got into the neighbors corn field(500+acres) ended up having to shoot the thing in the head. That was the end of that experiment.
The rest of them went back to the sale barn.
R

My dad once had a chianina bull, when he got to nine months used to jump any fence he liked, he or as dad said, stepped over any fence. He sold him on as that was enough for him. There is a guy locally who has embryo's imported from Italy. I was so tempted to try one but wouldn't know what to do with it.

Lee VanRoss said:
I still have a lifetime membership in the Chianina association. I see fullbloods as somewhat like having a stable of thoroughbred
race horses in that it takes a lot of commitment and resources. From my viewpoint the half and 3/4 blood can be challenging to say
the least. I made a choice not to be involved with them,'God Bless the boys, who make the noise on 16th Avenue' they are not for me!

Without looking I think I had Fignolo (?) bloodline I will say the big bulls are awe inspiring
Click to expand...

I had to "like" that post just because of the quote from the Sunny Sweeney song.
F

We had one. Only didn't know it when we bought it. What a learning experience. We went to this rancher's place who sold Angus bulls. He had one yearling bull shut away by himself. Man, he was a good looking bugger. We just couldn't pass him up. This was before EPD's etc were the rage. So we brought him home and we could not keep that bull anywhere. He sailed over every fence, every corral. No wonder he was shut up by himself!! (Lesson #1). Even trying to get him in horseback, he would sail over anything like a steeplechase jumping horse. So the last time he got out, Mr FH said "when I get that dirty so and so in again, I'm loading him up and he's going to town."

That's exactly what happened. He lost 200# and we lost $200 and that was before bulls cost a lot.