Learn from my mistake

Vet was quite amazed he lived. Said he's seen more animals spiked with a bale spear as @Buck Randall mentioned than run over. Extra wide fronts on the Fendt and the soft bedding under him probably saved his life.

On a bad note we just had a hard pull of a monster calf out of a heifer and lost it. Heifer is still down, hoping she's ok. We have a couple extra calves if she is. Should've loaded her up and headed right back to the vet for a c-section in hindsight. First time I've ever needed my calf puller. Been a few bad firsts this year...
OP
R

Poured some birthing fluids on the bottle feeder and put it in with the heifer while she was down to see what happened. I looked on the camera and she was up. Look a little later and she's bunting the calf the odd time. Go out to feed the calf one last time before grafting starts tomorrow and see if I need to take it out of there for the night. After feeding the calf I decided to give the heifer some hay and by the time I get back the calf is sucking her from behind and she's letting it. This is when I love heifers, she doesn't like the calf but she'll let it nurse. Doesn't happen like that with cows very often. Close enough for me, I'll pen them together till they're a pair.
OP
R

T1000 (Terminator model#) is feeling pretty good and has taken to going up the runway by himself in what I think is an attempt to get himself back to the big pen/pasture where the older pairs go. He'll get his shot of penicillin tomorrow and I think I'll let him do just that. 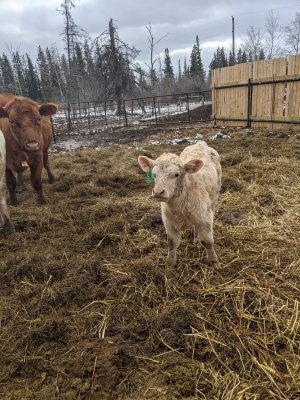