@suzorse thanks for stopping by!

My plan is to either take her over to OSU in Stillwater or draw blood and take it over there. I need to call them and see what the scoop is. I'm sure they can handle this tho.

Gotta get done playing catch up and get a bit of free time I reckon.
OP

Shes finally settling down a little bit. Got to rub her neck while she while eating this morning. Not for long tho!
She comes running for feed now too. Not a lot. She has good hay so just enough to tickle her fancy I reckon. This will be the biggest calf I've ever halter broke.
Slow n steady....
OP 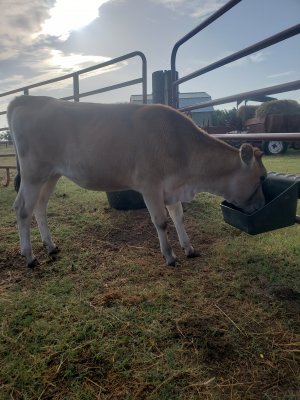 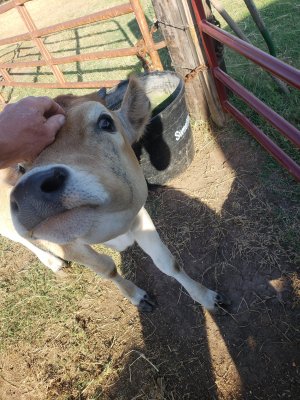 A small update.
OSU in Stillwater will pull blood and send to another state. They do not do the testing there.
Cost is a little over 100 bucks...
C

Watch out for them jerseys, you start with 1 and they start multiplying, fun little buggers! We raise several a year!
OP

HA!! I got you now my lil pretty!
I'll let her drag that around til next weekend, then it's on like donkey kong! 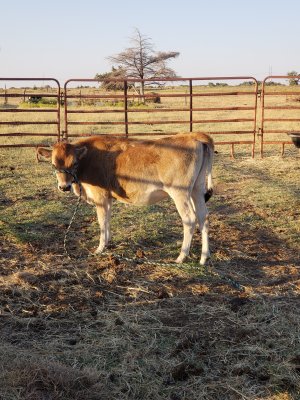 MurraysMutts said:
A small update.
OSU in Stillwater will pull blood and send to another state. They do not do the testing there.
Cost is a little over 100 bucks...
Click to expand...

Better than waiting a year.

You are right, her bite looks normal. I am glad that you are starting to pay attention to that.
OP

Meh...
Why wait?
She gave up pretty easy. Seems to be pretty smart. I tug. She moves forward. We will see. I'll tie her every evening for a while.
As a side note... I left the chain off the gate this morning. Better not do that again. Lucky it didnt blow open with this wind we have today. 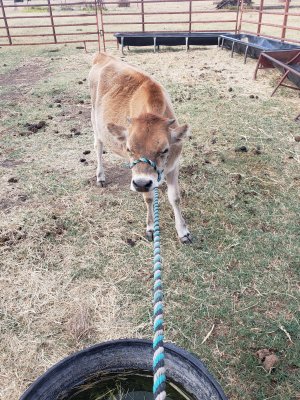 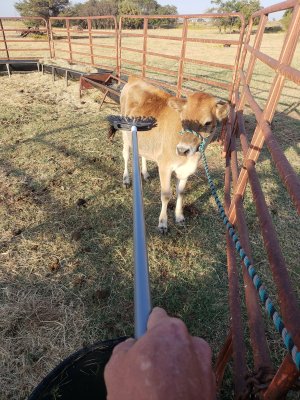 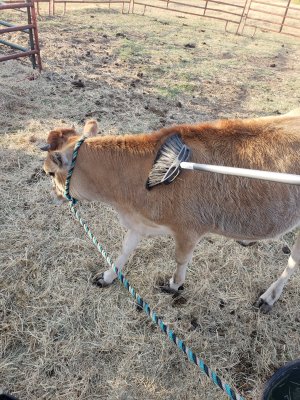 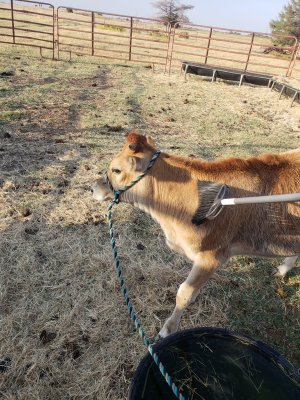 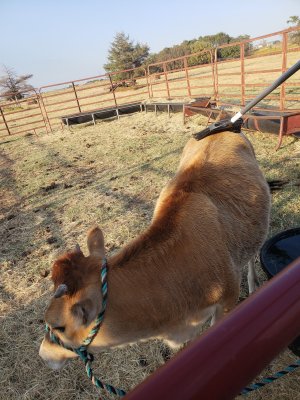 After about 30 minutes of massage therapy..... 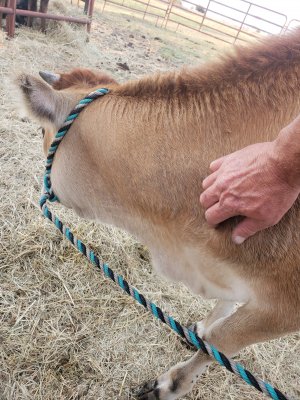 Shes terrible skittish. Especially if a new person comes in the area. She hasn't kicked tho!
Long ways to go.....
But amazingly, she responds well to the halter/lead already. Comes forward with a pull. I'll get her settled/desensitized good and we will try walking this weekend maybe. INSIDE the pen.
Last edited: Sep 28, 2021
OP

So I've been asked how I got the halter on to begin with.
LOTS of patience and trying.
Shes very food motivated. Able to pet her some while shes eating. Til she figures out your close to her. Then she runs away.

Took a couple dozen times playing with the halter. Rubbing her with it. Attempting to put it on. Repeat. Repeat. Repeat.
She never did relax enough to just slip it on. Got the top on like pictured above one night. She got out of it of coarse. Several tries later, I got it on like that again and left a BIG loop for the part that goes under her chin. She decided she was hungrier than normal and I just got lucky and slipped the bottom over her mouth. She ran away. Stepped on it and tightened it up herself!

I dont have a chute here. Was about to haul her to a friends and do it that way. But persistence finally paid off.

I got to get pretty close this evening without her freaking out. She LOVES tail head scratches and under neck/brisket scratches.

MurraysMutts said:
Yep! Murray's at it again!
No one wants a lil Jersey gurl, until I started the bidding.... started at .99, and I'll tell you what!, the auctioneer earned his money today. Bidding didnt stop til we got to 1.33
Oy! What HAVE I done?
Gotta get a halter on her asap!
View attachment 6900
Click to expand...

If she's skittish, wonder what would you call one that goes over or through a set of corrals?

jus teasing.
She seems to be coming along nicely. Saw a brahma/jersey heifer for sale not too far from me but probably outa my price range.
OP

Someone needs to go get this one!
Tho I think shes priced a bit tall

branxchar&charx said:
If she's skittish, wonder what would you call one that goes over or through a set of corrals?

So two things here....
THIS is a pita! I had a round bale that was 2/3's size. Figured I'd just fork it to the troughs as I was feeding the 2 lil ones separately. Never again!!
Squares are so much easier! 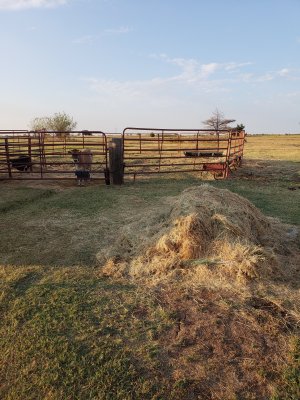 Now!
I was able to lead her right to her feed bowl this evening without much trouble.
Then I tied her like normal. I've been leaving her tied about an hour every evening, with enough slack she can lay down if she wants. Towards the end of the week shes settled down enough that she ain't fighting it. She lays and waits patiently.
THEN I was able to lead her to the hay trough. With some effort. Once she found out she wasnt tied to the post she kinda went bananas for a second and jumped around and pulled on me pretty good. Didnt give up tho and she settled after we went round and round a couple times. Off to the hay feeder we went..... 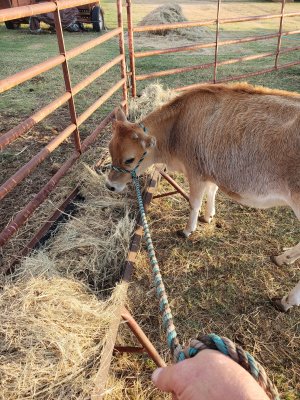 Progress! And pick up that netting.
S

A
Judge my jersey heifer