Calving seasons are not that popular here. Cows are having calves year round, 110 deg or 10 deg, rain sleet snow or shine.

You will find when you accept the mentality that you dont need to baby your cattle... you tend to not have cattle that need to be babied.

Not sure what having a tight calving window has to do with babying cattle. If anything it forces you to be more critical and willing to cut loose an otherwise nice cow that falls out of sync with the herd. Sale barn buyers like uniform groups of calves nap during with the right protocols pay a premium for them. At least in my market.

TennesseeTuxedo said:
Not sure what having a tight calving window has to do with babying cattle. If anything it forces you to be more critical and willing to cut loose an otherwise nice cow that falls out of sync with the herd. Sale barn buyers like uniform groups of calves nap during with the right protocols pay a premium for them. At least in my market.
Click to expand...

I see, I misunderstood then when you said most around you don’t have a defined calving season.

TennesseeTuxedo said:
I see, I misunderstood then when you said most around you don’t have a defined calving season.
Click to expand...

Ya, after I reread it... I could see what you saw. It sounded perfect in my head when I typed it.

Thanks for the reassurance Brute 23. Those of us unfamiliar with this weather are very nervous. I guess it is kind of like when parts of Texas got those frigid temps and snow this spring. People up north are thinking "No big deal. You will be fine". But of course they aren't familiar with your cattle or infrastructure, so Texans concern may have been appropriate. It is normal to fear things we haven't experienced before.
A

Katpau said:
Question for those of you from places in the south where 100+ degree days are a common occurrence. Do you calve in that weather, and if so do you lose calves to the heat? I'm not sure if I should be worried. Normally we keep interference with the birth and bonding process to a minimum, but I am wondering if the calf should be cooled off somehow if born midday.

Over 40 years ago I lost a newborn filly that was born on an extremely hot day in Minnesota. It was over 100 out and humid. It had not cooled off much overnight. We first found it early in the morning with the mom standing over it and we brought it in to try to cool it off. We were not able to save it. I never knew if it died just of heat stress or if there was a difficult birth or other complications. I keep thinking about this as I wait for cow #3030 to calve. At least here it almost always cools off at night.
Click to expand...

Haven't lost one calving In the heat ,,thank God..but i did lose a newborn to heat that got over in my Hay field and couldn't ""didn't""get back through the fence ,and died of heat exhaustion and dehydration..wasn't dead when I found it..just lasted long enough to say goodbye..

Katpau said:
Thanks for the reassurance Brute 23. Those of us unfamiliar with this weather are very nervous. I guess it is kind of like when parts of Texas got those frigid temps and snow this spring. People up north are thinking "No big deal. You will be fine". But of course they aren't familiar with your cattle or infrastructure, so Texans concern may have been appropriate. It is normal to fear things we haven't experienced before.
Click to expand...

My bull Hector was born in mid August.. he dried off real fast! Momma had TONS of milk so he got enough fluids without any help from me... He's about an hour old here! 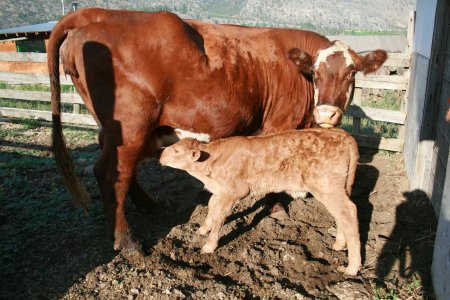 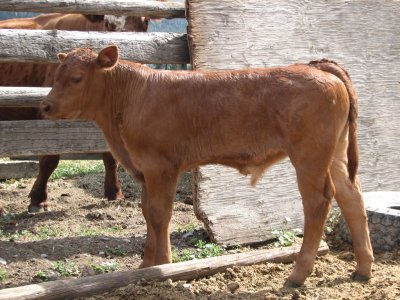 I think in the case of relative short term heat waves, it might be less about the breed or composite and more about whether the cattle are acclimatized to that kind of heat. Humidity + heat would be a wild card too. Most of us down here try to avoid buying replacements from the western 1/2 of the state for that reason.
B

One thing I have noticed and it might be total BS is that the cows seem to not be bothered by the heat and calving in it if it is late in the summer. Its like they kind of get used to it and go on about their business. I have a lot of cows that drop in August. Like any time of the year, if the calf is strong and gets up, its fine. The way I look at it, the calf is coming out of a body that is 104 degrees so coming out on a warm night is like they are put in a incubator.

Now what bothers me some is when the cows park their calves in the direct sunlight and walk off to the shade tree. It probably shouldn't as they seem to know what they are doing.

We invariably have some cows calving in the summer. All in all it goes ok, to me it’s better in the calf than being born in cold wet rains and mud of the winter. The issues that I see are sometimes flies will cause problems, and like someone else said they can tend to to just lay right out in the sun. Our summer and fall calves tend to not do quite as well growth wise as the others on average.
K

The next 36 hours will be the test. We went down before 6 this morning and checked all of the water storage and water tanks. It's already hot, but quite bearable. The flies were unreal on the cows. I've never seen them like that. One group was bunched up by a gate almost begging for help. I had some fly spray in spray bottles with me, and we walked around amongst the cows in three different pastures, spraying anyone that let us get close enough. The largest herd was somewhere up in the woods, so we let them be. When this is over I will bring them in and give them all a good pour-on.

Ky Hills,
Our calves are almost all born in cold rains and it doesn't seem to bother them much. In 2019 we had a historic extremely wet snow that accumulated to about 2 feet, right in the middle of February calving. We couldn't get out to them. All we could do was plow a path down to that pasture and feed hay to the cows that came out of the hills. I fully expected we would lose multiple calves, but we only lost one. They were smart and had their calves up in the forest, tucked in under the fir tree branches, where they were protected from wind and the snow stuck to the branches leaving a shelter below. We lost hundreds of trees to that heavy snow load, but fortunately none crashed down on a cow or calf.
Last edited: Jun 26, 2021

latest forecast bumped up the high to 109 for tuesday
L

You may need to use a Celsius thermometer to bring the numbers down. [just trying to help!)

Lee VanRoss said:
You may need to use a Celsius thermometer to bring the numbers down. [just trying to help!)
Click to expand...

43C is that number

friend of mine posted this.. I don't believe they'll get close to a 44C actual temp being near the coast, but the "feels like 50" might be a possibility (122F)

It was 91 by noon and 99 now at 3:20. Some guys from church were having a fishing get together with a fish fry at 2:00 today down on the Snake River by Huntington. Too hot to sit in a boat fishing catfish. And too hot for a picnic. Decide to stay home and watch the hay dry. Sort of like watching paint dry except it smells better.

Dave, do y'all have air conditioning in the house?
D

ccr said:
Dave, do y'all have air conditioning in the house?
Click to expand...

Yes, right behind my recliner. I spend a lot of time there in the summer afternoons.
K

According to the news, it was 104 yesterday and 115 in Roseburg today. That is something like 40 degrees above average. I had to drive over half way to Portland yesterday and I was surprised to see most of the cattle along the way, out grazing in the sun. We checked water and cattle early in the morning both days and then stayed in the house most of the rest of the day. I have had way too much time to waste at this computer!!

I am so glad we have AC. When we built this house in 1995 I told the heating contractor we don't need AC. I never had it before, not even in my car. He said the heat pump is more efficient and you don't have to use the AC if you don't want to, so I gave in. Well, I have used it ever since, and now I am so spoiled I never want to go back. That was about the same time that you could no longer buy a car without AC being a standard option. I can't believe I once considered AC an unnecessary luxury in my car. There are still many people in this area without AC. That is likely to change now.
Share:
Facebook Twitter Reddit Pinterest Tumblr WhatsApp Email Share Link