We have two main grazing units, and have struggled at times to balance the cow herd and the two bull batteries and our labor. Since we calve on grass in May - - we have been sorting in early spring to haul heavy breds and then end up calving at two locations.

That is a variation on what is done here. Except the trucking part. Here cows have legs so they get to walk. The exercise is good for them. 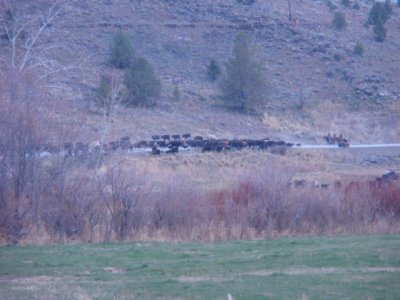 Everybody around here has to truck them if too far to trail or too many unfenced crop fields. Just part of the game.
OP
S

Having two grass grazing operations is unusual here. Some BTOs are trucking between grass in summer and corn stalks in the winter, but long hauls are getting more costly.

The more typical beef operation has one grass operation and a TMR.
OP
S

Dave said:
That is a variation on what is done here. Except the trucking part.
View attachment 10516
Click to expand...

How do they handle yearling heifers?
D

Stocker Steve said:
How do they handle yearling heifers?
Click to expand...

How so? Heifers are held in a different pasture through the winter. Mainly February born heifers when they turn them to grass in late April they are 14-15 months old. The bulls go with them. Again they are in a separate part of the world for about 60 days. Then they go out with the cows. I am sure that our definition of a pasture is different than your area.
Share:
Facebook Twitter Reddit Pinterest Tumblr WhatsApp Email Share Link

B
stocking millet and rye