Curious what you guys are paying for broiler litter this year, and whether it’s priced by the load or by the cubic yard, or otherwise.

I just scored 50 loads, for $150 per load. The chicken house owner that I bought it from doesn’t know how much is in a load. He only cares about getting his houses cleaned out, and he’s priced it at what he can “get for it” (his words, not mine)

The spreader driver that I’m paying separately, says about 6 tons per load, depending on moisture content, but he doesn’t charge for hauling by the ton or yard, just a load per loaded mile. He don’t care how much it weighs.

The truck appears to have similar capacity to 12 yard dump trucks that I’m familiar with.

If it is indeed about 6 tons per load, this should be about right for 80 acres of new ground?

I have been paying about 30 a ton spread for layer litter. Weights were estimated on a few loads being weighed and just averaged out. I actually pay him $60 per acre and figure about 2.5 tons per acre.
S

A lot of variation. A few years ago, I think I paid about $100 to $120 per load spread in the pasture. Typical spreader truck here is 16 foot, but some are 18. I remember paying $500 for an end dump semi trailer load dumped in a pile. I had to reload and spread. It ended up being a little less than 4 heaped up loads on a 16' spreader truck. So that was more expensive.

Some chicken farmers that do not have cattle just want the houses cleaned out and gone. A chicken farm nearby charges $30 per load. You push the litter to the end of the house with your skid steer, load it on your truck and move it out in a short time window. He has to get the houses ready for the next batch of chickens and needs it gone in a few days. If it has been removed from the house and moved to a stacking shed by the owner, it would be much more.

I think 16' loads here are generally assumed to be 6 tons. Generally cover 2-3 acres per load.

It's sold by the ton here, the market varies, generally 6$ a ton for spreading. Supposed to have an analysis, but that varies.
F

We pay around 28-35 a ton. That is by the walking trailer load and there is about 30 tons to a trailer load. Depends if it is broiler litter or turkey litter or from a layer house. Different analysis for different ones but off the top of my head I cannot remember the differences... one is higher in phosphorus and one in potassium.. but that may have just been the local farms' output.... it depends on the moisture content and the amount of bedding. In this area they are now doing more tilling and running a couple "houses" of birds before doing a complete cleanout so the concentration of actual manure is higher. Shavings have been hard to come by so some are using peanut hulls or other combinations for the bedding and that also affects the composition of the litter.
No matter, there are going to be more weed seeds and consequently more weeds in the hayfields. BUT, the increase in organic matter in the soil is a positive trade off for us. We are seeing more earthworms in the hayfields even when we have to spray for the weeds... better tilth in the fields when they get worked when we are transitioning from say corn back to orchard grass...
E

If the estimated weights are correct that is a lot of litter for 80 acres. We do not see the weed issue. But the price seems good. The biggest questions: moisture content %, did they use alum and how long are the cleanouts: one flock or one year. The one year stuff is quite higher in nutrients. The alum permanently binds up part of the P.
OP
O

Thanks for the replies. I’ve talked to another neighbor that has agreed to take 15 loads. That’ll leave me with 35 loads for 80 acres.

I put 2.5 tons of lime per acre on it last October, which is typical around here for fresh cleared ground. Hoping this litter will help it light off next year.

Chicken litter used to be given away around here 20-30 years ago. Now it’s hard to get in line. This new neighbor just bought the chicken ranch last year. I’m trying to contract with him to buy once every year.

Cows are stealthy, for being large creatures.
I’m leaving the gates open this morning so the litter trucks have easy access. All the cattle were near the gate at daybreak, right about the time I started prairie doggin’. So drove to the house at breakneck speed to pinch a loaf.
Probably 5 minutes and they were gone. Solid gone. Damn cows.
OP
O

The litter trucks finished today, in spite of the heavy rain at times. They weren’t able to get some of the steep hillsides.

I haven’t gotten the bill yet, but they hauled between 35-40 loads (6 ton) and covered about 65 acres of new ground.

I’m hoping with the lime last October, litter now, and chemicals next spring, I can get the undesirable vegetation knocked back.

During the 3 day litter spread, I had to keep rotating the cattle on some areas that were poor forage. They ain’t happy. Grandkids went with me this evening to give them a treat, and play in the muck. 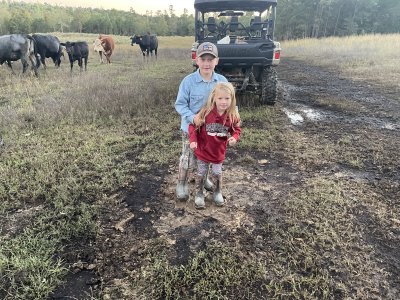 I misunderstood the cost. He told me it was $150 per load and I’d pay the hauling separately. I assumed $150 plus the haul/spread.
Litter was $70 per load and haul/spread was $83 per load including $3 per mile from the chicken houses (11 miles round trip).

He told me next time, if I buy the seed, he can spread it on the litter in the house before he loads. Then spread the litter/seed mix.
OP
O

Yesterday, that boy was riding with me on the side-by-side, when out of the blue he asked me “Hey Grampy, did you know redheads are good…….and blackheads are bad?”

You may imagine where my mind went. After several seconds of never mind, I realized he was talking about the buzzards v. Vultures.

The buzzards have been enjoying the litter with some chicken parts.