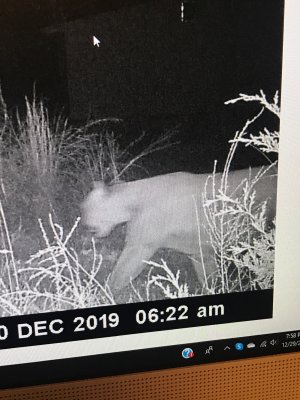 Although the official state story is big cats don’t live in Oklahoma, they do pass thru/migrate. This one was at our cabin in 2019. I don’t like coyotes but would rather deal with them than big cats.

Anyone else see surprising wildlife?

They're in OK and KS. Our builder saw one when we were building the house and there have been quite a few sightings around here.

Rancher about 10 miles south of us was missing newborn/very young calves and eventually called the Game Warden. "Look up" is what he was told. Mountain Lions will carry their kill and stash it in a tree when they don't bury it. And he did find the remains of a calf in a tree.

I've personally never seen one here, but quite a few bobcats.

My wife is from Le Flore County, OK, last time I was there with her visiting her family, one of her cousins told me about seeing a mountain lion.
I would agree with you, in that I don't like coyotes, but would much rather have them around than big cats.
The wildlife officials, are the same in most other places too. Here, they say they aren't here, and even though two have been killed in the state in recent years, one hit on a road, and one actually shot by a wildlife officer. The official word is that they were likely brought in or escaped. Couldn't possibly be that they traveled on their own, in a natural range expansion, like bears have done into this area. I know several people that say they have seen mountain lions.
Years ago, there were no bears here, but were in the mountains to the east and southeast KY. There started being sightings of bears here in the County and a couple got hit on different interstates.
The official word was that it was just young males roaming, and that there were no female or resident bears here in this part of the state. A neighbor caught sight of a female and cubs on his trail camera, at the same time they were saying that. Now its not unusual to see bears or signs of where they have been.
L

If you want some extras I have plenty to go around. Not unusual at all to find a cat killed deer within a quarter mile of my house. On a fresh snow I often find cat tracks in my driveway. Almost everyone around here has killed one. Those who haven't killed one just didn't have a gun when the opportunity was there.
A

They've always been here nothing new.

Their everywhere. Visited with a producer in South West Iowa that had a confirmed mt. lion kill. My dentist swears he lost an 8pt. whitetail he shot to a lion. He had some pretty interesting pics on his phone.

SBMF 2015 said:
My dentist swears he lost an 8pt. whitetail he shot to a lion. He had some pretty interesting pics on his phone.
Click to expand...

How did that happen? Was he following the blood trail and the cat got there first?

sstterry said:
How did that happen? Was he following the blood trail and the cat got there first?
Click to expand...

Yep. He hunts some pretty thick stuff. Lost the blood trail. Found the deer after two days of looking. Said their was hair next to the eaten deer where the cat plucked the hair out before it ate.

It was interesting talking to the producer in IA. There wasn't a kill mark on that calf, but it looked like a butcher had deboned the back quarter. The DNR officer skinned the calf's neck. The guy said the hide didn't have any marks but the throat and artery & vein were crushed.

Better watch out, them things can levitate, and leave bat&#@! on logs.
D

I know a guy here who was bow hunting for deer. He was nearing the top of a ridge. There was a bunch of noise from the other side of the ridge. He spotted a big set fo antlers coming his way. Came back to full draw. Over the ridge came a mule deer buck with a cougar on its back. He raised up a bit and stuck an arrow in the cat. The buck got away. The cat didn't.
This last fall my son shot a buck. His buddy and him were searching for it. The son looped up the hill. His buddy who had shot his deer a day or two before had his rifle but hadn't loaded it. A cougar apparently moving away from my son walked down a draw right in front of his buddy who stood there with his empty rifle and watched it walk past.
O

They don't exist in Arkansas either. Apparently a much higher percentage of Arkansan's hallucinate. You've all seen the overweight bar fly standing in front of her trailer, wheels still on, cigarette flinging wildly between her lips as she recounts the UFO in her truck stop waitress raspy voice.......................well, big cat stories are given the same credibility.

Before game cams and everyone having a camera/phone in their pocket, it was sometimes difficult to convince the Game and Fish. Back then I was told by the warden, they know we've got the big cats, but if they acknowledge that, then they must protect them. There is much administrative cost associated with that, so they denied until they couldn't.

We've had cougars come into hunting camp at night a couple times and scare the pack string. Those glowing red eyes at night are creepy!

Up until a few years ago I worked a couple hours on Saturday and Sunday feeding and checking things to make sure everything was okay at a high fence place a few miles from my house. One was in the area for a while, and while it was there it would crawl under the fence and kill the rheas they had there. It didn't leave a single one alive.

I have a good friend I've known for 35 years who wouldn't lie if his life depended on it. He says he saw a black one walking to the deer stand ten years or so ag, although the authorities say they don't exist in Texas.

Lots of people think if they haven't personally seen one or their best buds down at the coffee shop haven't, then they don't exist.

Deer are their primary food source, if you have deer you can have mountain lions that at least pass through the area. If the state denies their existence then there shouldn’t be any regulations against shooting them.

Cougars can be found in any location, but usually they frequent the local bar!

J+ Cattle said:
Cougars can be found in any location, but usually they frequent the local bar!
Click to expand... 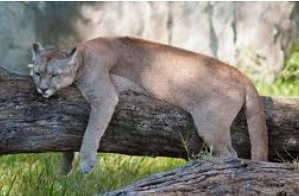 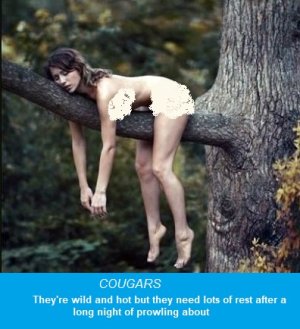 Around here cattle mutilations and the like aren’t caused by cats or bears . They are the results of skin walkers , ufos , aliens, zombies, Bigfoot or any number of other boogey men

Rmc said:
Around here cattle mutilations and the like aren’t caused by cats or bears . They are the results of skin walkers , ufos , aliens, zombies, Bigfoot or any number of other boogey men
Click to expand...

Baba Yaga is the original 'boogey man' but unlike the John Wick version, Baba Yaga is 100% feminine

At a trappers convention probably ten years ago, a guy cornered a dnr officer that was a speaker. The guy had pics of a cougar with kittens off his trail cam. The officers response (head shaking) "That just can't be, we only released males, oh wait" then he got right lipped. It has been suggested forever that the IL dnr released cougar to help control the deer population.
Share:
Facebook Twitter Reddit Pinterest Tumblr WhatsApp Email Share Link