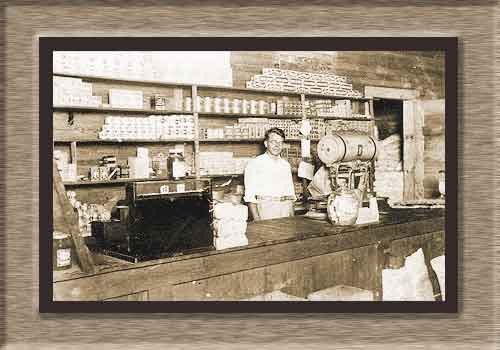 The Country Store has been a Gravlee Family Tradition since the late 1800's when my Grandfather built and operated  the Commissary in Sumiton, Alabama.  Although the Commissary closed almost a half century ago, a family tradition is now renewed with the birth of the Cattle Today Country Store. We have selected the Internet's best merchants offering a wide variety of  products available at low Internet prices. You can now shop with comfort and convenience unknown to the miners of long ago.  Browse through our store to see how you can satisfy your shopping needs without getting into the crowds and leaving your comfortable chair at your computer.

The Country Store is Always Open!

Soon after the American Civil War, people started moving around and settling in small communities all over the country. Most of these settlements were far from the big cities, so each small town needed a doctors office, and maybe a dentist, a blacksmith and of course a place to buy supplies. Small general stores sprang up everywhere. The store was a place that anyone could get just about anything they needed. They sold grain & horse medicine, thread & cookware, tobacco & coffee, stoves & boots, guns & ammo. Just about everything people needed to survive during that rugged time in history. And very often, it also served as the local post office,  a meeting place to exchange town gossip, and a convenient location to play a game of checkers. It truly was an important place.

My Grandfather rode his gray stallion home from the war and traded him for 1,200 acres in Walker County, Alabama (it must have been a very fine horse).  Around the turn of the century he leased the coal mining rights to  Birmingham Steel & Iron Co. with the agreement that he would operate the Commissary. The Commissary and the coal miners were dependent upon each other. The miners would buy food and clothing on credit at the Commissary until payday.  The customer would come in the store and tell the clerk what they wanted.  The clerk would get the order together and hand record what you bought into a ledger and would total the amount due each month.  Statements were never sent out because the customer came to the store at least once a week and the clerks knew everybody's name.  When the UMW would go on strike the Commissary would carry the miners debt and continue to supply them with the result that many people could not pay off their commissary bill and would be in debt for many years.

If what was wanted could not be found in the store, a mail order catalog was provided from which the customer could order. The catalogs, sometimes called "wish books," carried as wide a variety of more expensive items.

The picture at the top of the page is my Father in the Commissary in the 1920's.  The family operated the store, which burned down twice, from the turn of the century until it closed in 1955.  It was replaced by a family owned Piggly Wiggly which is how I got into the supermarket business.  But that's another story...  Macon Gravlee

The Country Store is Always Open!