Dr. Death is on TV weekly here. He is so serious it can be humorous. He said some of the statistical fun is over for this epidemic - - since we now know there will be reoccurring waves till it burns thru the population.

Obviously this corona is more infectious than the regular flu. Here the corona hot spots are usually air conditioned bars. My guess is that a lot of folks in the south and south east are huddled up with AC that recirculates the virus.

What happened with the Sweden experiment?
Stocker Steve
Top

Didn’t go well.
Making Cattle Today Great Again!
Sometimes you do have to throw out the babies with the bath water.
Top

Here's a rather long video about the rioting - and IMHO - it is spot on. 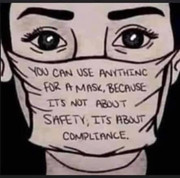 Amen and then some. Astounding how many have willingly swilled the cool aid.
Top

Amen and then some. Astounding how many have willingly swilled the cool aid.

If everyone went to wearing Trump 2020 masks, how long would it be before they advised against wearing masks?
Top

herofan wrote: ↑
Mon Jun 29, 2020 12:45 pm
Isn’t it safe to say that there is a lot that is unknown about the virus? It’s crazy how it barely affects some people, while it lands others in the hospital for 60 days or more and kills others. I see it’s picked back up in some states that reopened, and what about the idea that it hasn’t died out with the summer like the flu does.

Yes, it is safe to say there is a lot we (as in the public) will learn, but, also, that medicine and science will learn possibly.

I think there is a lot of clued up humans though who deal with medicine and science, so they prob have a good grip, and so our govt here has done things according to what they believe....however, medicos and scientists are not accountants or economists.

Does not means each group is clueless on the other, but that is the tug of war going on basically.
Top

The mask thing is not BS, masks worn by person A, who wears it properly, potentially protects person B to Z.

We do not have a mask order here, but that is only because the govt wants masks to be available to emergency services etc, and, to simplify things IMO in regard to messaging, and as we have relative low problem.

If they did not work, nearly every medic would be ill.

We know enough to know how best to avoid it as much as practical. We have been dealing with deadly things for a long time in controlled env. It is when people make mistakes or do not follow protocol that accidents happen, same with this virus....
Top

No. He is a retired Doctor from University of MN who still consults. He make Fauci look like a bubbly cheer leader.
Stocker Steve
Top

I enjoy some straight talk from Dr. Death after all the sensational spin.
Stocker Steve
Top

It’s being reported that there is a spike in cases in over 30 states. They are predicting we could see 100,000 new cases a day. I see they are getting refrigerated trucks for bodies.
Top
Post Reply
112 posts