The place to start if you are new!
Post Reply
18 posts

You guys never told me cattle hide their calves!

. Super excited that my heifers put first calf on the ground this weekend! Bought them at 6 months old and have never done anything like this before in my life (almost started a thread called, "remember your first calf?"). I was up in a tree watching the cow lick the calf clean, took it's first steps, and watching the other heifers act all curious and careful. Went back 24 hours later to check and NO CALF! Momma looks like everything is fine though. So I frantically text a friends who tells me mammas will hide their calf. Did I mention I have 4 heifers on a 55 acre pasture of tall native grasses, honey locust groves, and plum thickets? Looked forever but never found the calf. But also didn't find a dead calf or buzzards...So I'm cautiously optimistic but here's my question (finally!): When do calves stop hiding? This is stressing me out!

From a day to a week or more. Momma cow will know where it is.
And don't scare it up without momma being there. They can totally run away and even the cow can't find them.
My thoughts only, don't bet the farm on them. KT
Top

a good mommy will hide her calf to protect it from predators. No set time on when they quit hiding them. I have had cows hide calves in a pasture with grass no higher than my ankle. walked along the fence where the grass was higher on the other side of the fence and no luck either. Had one cow had a set of twins in the same field and didn't know it until about three weeks later when they both came out to nurse at the same time. Good luck finding anything in the tall grass cover. I have even locked cows up overnight that I knew just had a calf with the hope that she would lead me to her calf when I let her back out, but that did not work either. If she knows you are following her or are present around her, she will not call her calf out.
Top

saved a hiding newborn in the fall. Coyote was within ten feet of it ready to make himself dinner. I was at the right place at the right time
Top

One of my cows always hides her calves. Her last son was named El Chapo for a reason. It’s less common for me tho. I’ve only had one do it and it’s super stressful haha
Top 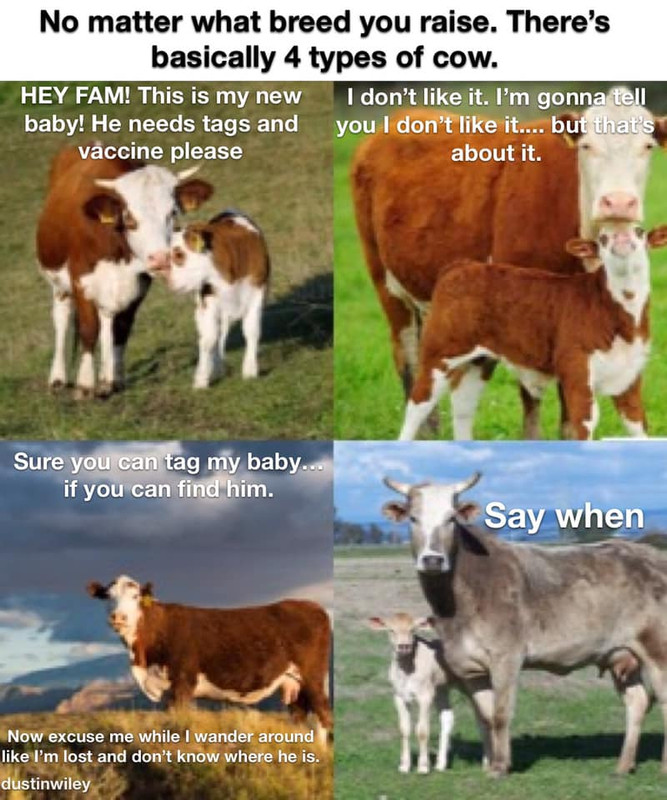 This is the best meme
Top

It was always a scare when I changed pastures. A calf got left behind a few times. A cow bawling with swollen teats was a sure sign. Turn her back to the old pasture and she'd make a bee line for that calf.

Other cows would just stay behind. The whole herd would be chomping at the bits for new grass and some old gal would be holding, out of character.
Our ancestors gave us this. They fought to make it what it is. All we have to do is defend it.
Top

Some cows stay right by their calf for the first 2 or 3 days. Never letting it out of their sight, even if it means they miss a meal or two. Others stash the calf away in a good hiding place and only return a few times a day to feed it, and if they think you’re watching they won’t go to it. Some will go to the calf if they see you heading in the right direction and others will just look the other way to fool you. The calves will stay hidden and most won’t move until you almost step on them. But when they do move, they are likely to take off fast and frantically and now things are worse, because neither you or the cow know where they ended up.

The calves in a herd of cows form what I call the calf nursery. The calves hang out together in a group while one or more cows keep watch and the rest of the cows go about their business grazing. Most cows keep their calves away from the group in a private location for the first 2 to 5 days, after that the calf is generally introduced to the nursery and your stress level goes down when you see them with the rest of the group. I find that most of my calves are in the nursery by the 3rd or 4th day.
Top

I could write a book on how clever cows can be at hiding their new borns.

Had a great Kelpie who could scour big pastures find the calf & go on point without disturbing mother or calf. Dearly missed.
Top

The matriarch of my herd was the kind of cow that wouldn't even let the calf play without being RIGHT there... for like 3 weeks!.. Saler influenced and it showed, she was friendly though, but I wouldn't ever totally trust her.
What can be asserted without evidence can be dismissed without evidence
-Christopher Hitchens
Top

My latest had hers off by herself. Shes stayed right there with it all night.
I went to check on em this morning, knowing full well she would still be there, with a big scoop of cubes.

I could tell she appreciated it.
She told me so....

They were both with the herd this evening.

Btw, she a number one on that chart. ^^^^
Crossbred for high bread vinegar....
Top

My mature cows usually hide em for about 3 days, lost one off a first calf heifer about a month ago, because the bigger calves wouldn't let it rest, and it turned cold before he had his strength. Mismanagement on my part, but you can't win them all.
Being poor is the most expensive thing there is
Top

They will also lead you away from their calf. I had one fake me out big time. I pulled up she took off in a dead run nearly and then walked around and started staring in one direction. I couldn't find it anywhere. I was convinced she actually lost her calf. I finally went back to where I first saw her and the calf was nearby.
Top

This one is great too

Return to “Beginners Board”