My place is rented at the moment and there is a dead cow floating in the pond. I notified the renter and he said he would see what he could do about. That was two days ago and the cow is still there. How concerned should I be if it is not removed? thanks in advance Don

The government is like a baby's alimentary canal, with a happy appetite at one end and no responsibility at the other. -- Ronald Reagan
Top

I would be concerned enough to tell him to remove her from the pond or the rest of his herd from the property. Not sure what the health risk is but it couldn't be good.
My thoughts only, don't bet the farm on them. KT
Top

It has been 2 days and he hasn't shown his face? I would call him and tell to come get it out. If he lives say an hour away I would give him an hour and 30 minutes to make it happen. Tell him if he can't make it in that time to just bring a trailer to haul off the rest of his cows. And to get them hauled off by sunset.
Top

The longer he waits, the worse the damage. An animal in that long is likely to fall apart when you try to remove it (ever try to fish a dead rat out of a water trough after two days?). Nasty job and there is already enough damage done to the water source. Might be best to make him pay to have the pond cleaned professionally. Could you call those folks that treat retention ponds?

Poor herd management. Probably needs to move on when his lease is up.
"For many will come in my name, saying, 'I am the Messiah', and they will deceive many".  Matthew, 24:5
Top

He should have been there asap with a chain and a tractor or you should have and sent him a bill.
where'd it come from, how'd it get there?
Top

I recently had a dead bull that was struck by lightning and wasn't decomposing (even had him posted). I needed to let the cattle in that section of the pasture & was concerned about potential health risks. General consensus when I posted here on CT was no health risk to the other cattle BUT I knew for a fact the cause of death; i.e. no disease or anything transmittable. Couple years ago I had a cow with lymphoma that went down in a creek. Called my vet for his opinion on potential water contamination and he recommended getting her out if there was any way possible before she died because it was a significant water source for the herd (she actually made it out on her own so all good).

Since you (and evidently the renter) don't know the cause of death I would be concerned about the quality of the water. Is it flowing at all? If a creek runs in/out and you have a dam & whistle(s), maybe not as much of a problem but I still wouldn't want a dead cow floating for days. I definitely wouldn't want him as a renter! Give him a definitive time to remove her - and the rest of his cattle.
Top

Boy would I be hot right now... but I’d also buy a 12 pack and watch this fool dig cow parts out of my pond when the time comes. Up wind of course
Top

somebody needs to drag it out of the water. maybe that is just me and my location, I am kinda sensitive to contaminating water sources since it is usually pretty dry here.

otherwise if you don't need the water it will probably be Ok in a few months, depending on volumes and site ecology. hope she didn't die of anything contagious.
Top

Do you guys have yabbies or marron in your dams there? They'll make short work of it if you do. Could get a bit gross though.
Top

I would get it out, and he would have a bill. 2 days and nothing done, no.
Being poor is the most expensive thing there is
Top

Do you have any sort of contract? We have always drawn up a contract if/when we lease pasture or field for crops. It's for this reason exactly that we do a contract. So that we have an out if needed. I'd get it out then get him out.
Top

Hopefully this pond is hidden from public view. Things like that just open you up for animal welfare complaints and you don't have a leg to stand on.
cor durum laborem
Top

Landlords I used to rent from called me once to say I had dead cow in the creek there.Probably due to water hemlock but who knows?It was in the summer and when I pulled her out with the boom on the backhoe,I almost had to come off the seat.
Hope the wind is blowing away from whomever has to do this.
Not everything your neighbors do is wrong-Not everything they do is right,either.
Top

Lol..they'll have crawfish there I imagine, which are small fresh water crustaceans that look like really little lobsters It would take a bunch of 'em to eat a cow..

What's the thoughts on ecoli hazards?
I know it can live in soil..can it live in mud?

I haven't had a dead cow in the ponds in many years, but did have 2 calves in there at different times in the last 6-7 years. his is the last one and it smelled bad enough after 2 days. Pretty sure dogs ran it into the water and it drowned. 2 days old I think. 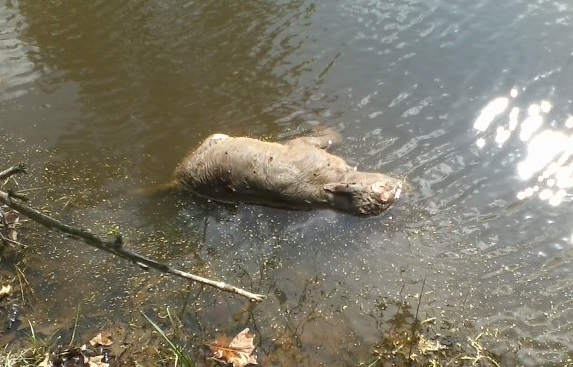 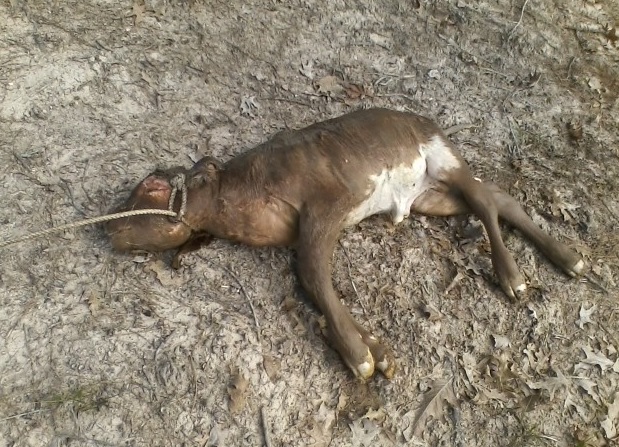 I had a neighbor once that took a longhorn down to the creek and shot it and pushed it over the bridge. The stream feeds my property downstream. He was not a farmer and just had a couple as pets and it was obvious it was his because he was the only person with longhorns around. He had to lead it about a 1/4 mile to get there (not a very savory fellow).

I called the Sheriff and had a deputy come. Deputy and I went to the guy's house and told him to get it out now. I am sure he did not want to take the trouble to bury it so he led it down there and shot it. That is the only way it could have happened.

Cost him more in the end than if he had just paid someone with a backhoe!
Top
Post Reply
23 posts