Sounds like SARS killed up to 10% of the people who caught it. Any idea how hot this new corona flu is? Have you stocked up on face masks and meds?

Saw a medical professional on TV last night. 7000 deaths due to regular old influenza in the USA in the past 4 months...only 17 deaths attributed to the novel coronavirus so far.
Reports I've seen on the ProMed list indicate that most of the coronavirus deaths so far are older individuals with preexisting conditions like Type II diabetes, renal insufficiency, etc.
Time will tell.
Top

Looks nasty but it sounds like it only has a five day incubation period so they may be able to stop it. I heard it probably came from a snake, how weird is that, a cold blooded animal. No cases in Australia yet but with 3 or 4000 people arriving from China weekly that wont last long.
Top

Plywood and bullets. Board up the house and shoot anyone who comes down the driveway. We are to that point right?


Nah, it's a good thing. Think of it as a toilet flush to the system. Get public refocused on something that can kill them vs. Climate Change. I am big supporter of pandemics in today's world.

Icing on the cake would be if it all originated from an Impossible Burger made in China.
cor durum laborem
Top

[quote=Redgully
I heard it probably came from a snake, how weird is that, a cold blooded animal.
[/quote]

Must be hard times in the Chinese meat market with both snakes and pigs having the flu.
Stocker Steve
Top

News report shows this picture of China building a new hospital in 10 days:

But the picture shows excavators scratching the ground like a bunch of chickens and people who view it are supposed to believe they are hard at work on this new construction.

Don't think the picture represents on how construction would start on a new facility.

Now they say it came from a bat. There is pictures of Chinese eating live baby mice and cooked bats. Two cases confirmed in Australia now.
Top

But the picture shows excavators scratching the ground like a bunch of chickens and people who view it are supposed to believe they are hard at work on this new construction.

Don't think the picture represents on how construction would start on a new facility.

You ever seen a highschool here in the US, where temporary modular classrooms are brought in and placed next to each other while the real school building is being built?
Same thing.

They built one during the SARS outbreak in 6 days. All that is needed is the ground leveled and drainage & electrical put in. These are modular hospitals that are already built, and just have to be trucked to a destination and individual units assembled next to each other. Designed to go up in short timeframe in case of war or natural disaster. They aren't like our hospitals.
The Red Cross has several of these type hospitals that can be sent anywhere by container ship, trucked to a pad and put together is short order. So does our military.

You can actually buy one of these hospitals on Alibaba and Indiamart.
https://www.indiamart.com/proddetail/pr ... 50555.html

The Reds excel at this type thing, because they have:
1. Unlimited labor source.
2. Don't have to have any environmental studies done.
3. Don't have to meet any codes except what the Central Govt in Bejeng says and all they said in this instance was "Do it."
4. Doesn't need to have all the amenities our hospitals have and that we have come to expect.
5. Cost is not a concern.

According to the Beijing News, a state-backed newspaper, the hospital will be a prefabricated, box-type model that can be built in six days. A design plan will be released on Friday, the paper said, with construction due to begin soon afterward in Wuhan's southwestern Caidian District.

Xinhua said the new facility was aimed at “alleviating the shortage of medical treatment resources and improving the ability to care for patients”.

“We’ve mobilised all the workers left in Wuhan to work in shifts to ensure round-the-clock construction,” said Zhang Chongxi, manager of building group Wuhan Construction, according to Xinhua.

In 2003 China erected a hospital on Beijing’s rural outskirts in barely a week to cater to a rapidly rising number of patients suffering from SARS, or Severe Acute Respiratory Syndrome, which killed 349 people in mainland China and 299 in Hong Kong in 2002-2003.

Xiaotangshan Hospital consisted of prefabricated structures and Xinhua reported on Friday that Wuhan was building the new facility based on the same model.

They're building 2 different hospitals. One has 1500 workers working on it, the 2nd has 2000.
The 1st will be in operation Feb3 with 1000 beds, the 2nd will be staffed and treating patients Feb 5 with 1300 beds. They better hurry..currently, right at 2000 people have the virus in Hunan.

new coronavirus hospitals explained
"For evil to flourish, all that is required is for good men to do nothing" Burke
Power corrupts. Absolute power corrupts absolutely.
It ain't easy being a used cow salesman.
Top

This could get ugly.
Making Cattle Today Great Again!
Sometimes you do have to throw out the babies with the bath water.
Top

Seems it had spread to lots of countries now. Must have been around for a while. Hopefully they have a cure soon.
Top 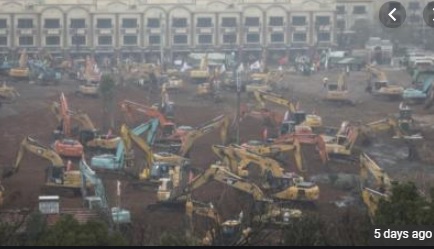 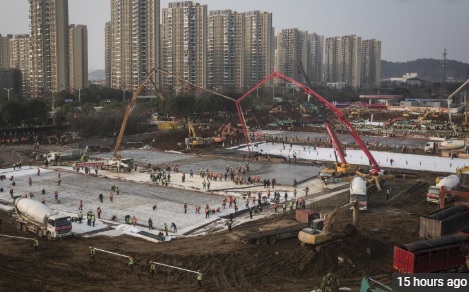 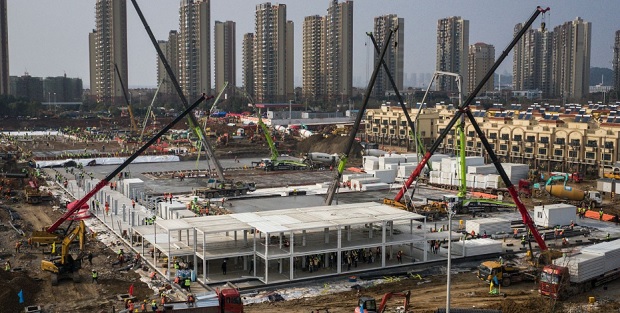 Do they have Obama care there?
Stocker Steve
Top

No, only a roaring body parts trade.
Top

We should be on alert but no need to panic just yet. I hope this fades as quickly as SARS, Swine Flu, etc etc.
Top
Post Reply
97 posts