Discuss the advantages and disadvantages of your favorite breed.
Post Reply
23 posts

Like holm25, that 'mealy mouth' and the speckled pattern of white on the udder suggests that there's something else, like Jersey, behind that cow.
That said, my bet is that calf will end up black... looks not unlike a lot of calves here with two black parents.

And yes, there are registered Angus that do carry the 'wild-color' gene, but that cow is almost certainly not purebred Angus.
Top 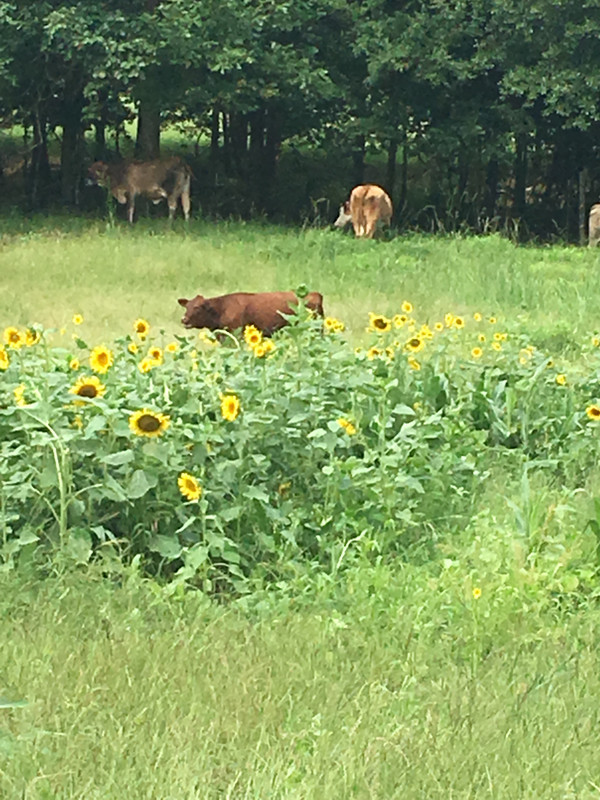 Nice patch of sunflowers!!!
Simme Valley of New York - http://www.SimmeValley.com
"We make a living by what we get,
we make a life by what we give."

Baby hair will bleach out..
For those who understand, need no explanation, ....for those who don't, none will do
Top

Do Angus cows ever have pink udders? Are they allowed any white on their bellies or udder? Just curious. My Dexters are allowed minimal ventral white up to the navel. The white is thought to have come from Roman cattle (which were white) that were imported into Ireland during the rise of monasteries and Catholicism. Kerry Cattle (another very old Irish breed that is predominately black) have the same white markings that crop up in the same areas. I always wondered if White Park Cattle got their white from Roman cattle in the British isles.

Watch out for roamin' cattle.

Yes, Angus are allowed white on their udders and up to the navel.
Making Cattle Today Great Again!
Sometimes you do have to throw out the babies with the bath water.
Top

The dam may also have some Braunvieh in her. I have several and that white nozzle is familiar and they throw the tigerstripes on occasion, particularly with Herefords, but also on Angus.
Top
Post Reply
23 posts