Discuss the advantages and disadvantages of your favorite breed.
Post Reply
67 posts

Stocker Steve wrote: ↑
Fri Apr 19, 2019 8:23 am
Back when we retained high percentage continental heifers - - we still calved them at 2 years but we had a slightly lower bred up and a slightly lower breed back. They grew more for a longer period than the British kind, and I think that effected fertility.

I can imagine that. Have seen many people calving continental heifers at ~2years age and they like it, but also seem other which will never do it again. All have said that they need better care after calving if you want them to breed back in time.
These heifers should go out on grass in a month time and they are in a good condition, so hopefully they'll breed back in time. Had a huge train wreck with calving heifers in fall... Very few would breed back in time, most would come in heat only in spring or would wait for the weaning...
Our pure heifer is born in June, so if I wanted to calve her in spring next year, would need to breed her very young. Going to wait for an extra year and calve her at ~33months age. Heifers of a couple other continental breeds won't be bred at a young age too. They might do okay, but who knows. Don't want to risk.

SS - I think things may have changed since you did that. Of course, I have ALWAYS bred for calving around 24 months of age, even back in the 70's when I was breeding just commercial cows for my first 1/2 bloods. Rare that a 2 yr old doesn't get bred back, but have had 3 yr olds with 2nd calf end up in the latter part of my 60 day calving dates. To me, that is the hardest group to "hold together". They are a bit thin when we wean at 2.5 yrs old, and just have a hard time getting back into a good BCS of 5- 6 for calving next year - with our winters.
Simme Valley of New York - http://www.SimmeValley.com
"We make a living by what we get,
we make a life by what we give."
Top

Yes, we are usually behind. But I think the economic issue is a matching genetics with our cost effective forages.

The majority of our breeding issues were with Limi crosses. Seemed very slow to mature. Held a couple fancy ones during surplus forage year, that had their second calf at four. Bad idea. Got to be huuuge cows.

Our simi crosses were usually very fertile, but annually we seem to have one or two that milk too much for our forages, and then miss the breeding window.

We currently have one calving season and two chest freezers...

Usually calved at 27-33months age before.
We now have one limo "heifer", which had a dead big first calf in November,17 (was 27months old), then hasn't bred back for a while. Not sure why. Finally stuck to AI (it was the last try for her), and now due in August. She'll be four this June. She was the youngest and smallest from her group, but had a pretty good growth. Needless to say, she's BIG now. I don't really mind that, just would be nice if she'd wean a heavier calf than average cow.
Usually there were no fertility problems most of the time with spring calving heifers. Some have moved from late winter to spring calving though. Will try to avoid calve heifers in fall.
Years ago have read about a research done in France with a couple beef breeds. Heifers were calved at 2 and at 3 years age. Those calves at 2 years age lacked maternal instincts. Especially charolais. They need to mature more. I might be changed abit now, but they still are slower maturing animals.
Top

In "general" - all Continental breeds are later maturing ---- except the Simmental. They were proven "back in the day" at MARC to mature faster than Herefords. I guess Herefords are little slower than Angus?? not sure.
NY used to have a bull test at Cornell (long gone) and I was a breed rep. Anyway, the breed reps voted to lower the scrotal circumference for Limousine's to 30cm because they could not qualify with the 32cm min. yearly requirements.
I believe the largest SC was always an Angus, but the Simmi's never had an issue passing easily.
Simme Valley of New York - http://www.SimmeValley.com
"We make a living by what we get,
we make a life by what we give."

Hopefully will be able to move all on grass soon. It would make a huge difference in calves, however, I still like how calves are growing. One of the best group of calves from heifers in the past several years. Some pics of Blondex calves. 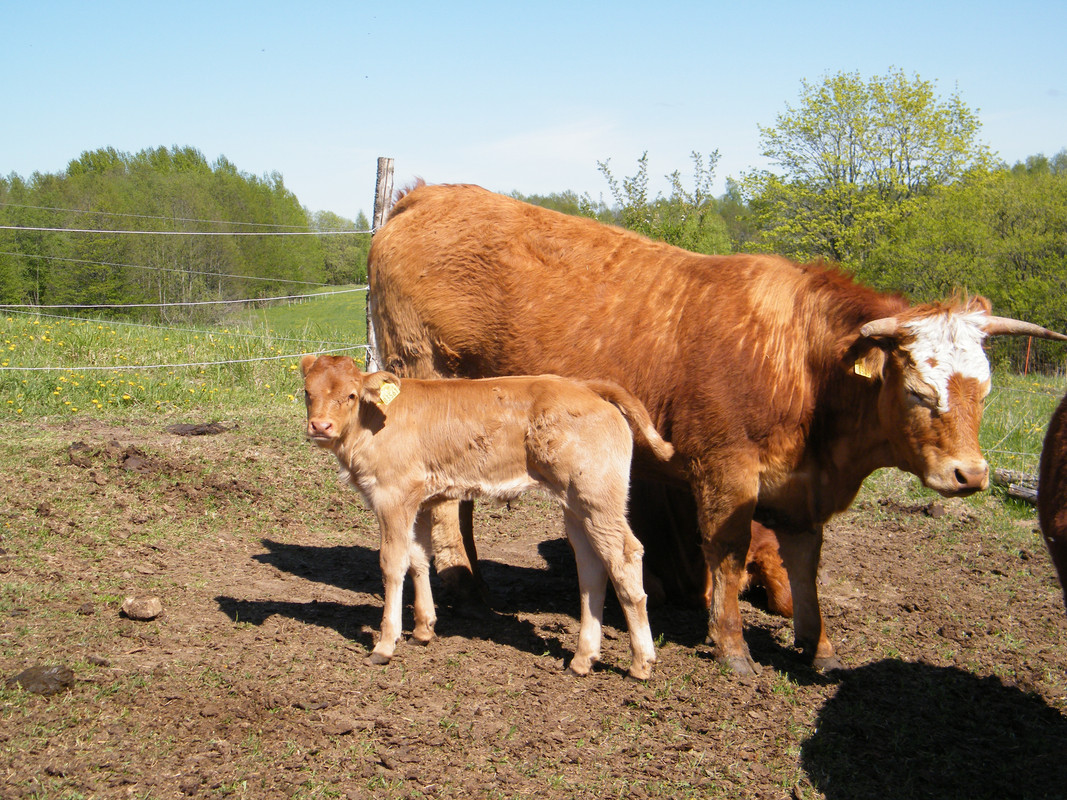 The youngest heifer with her dam. 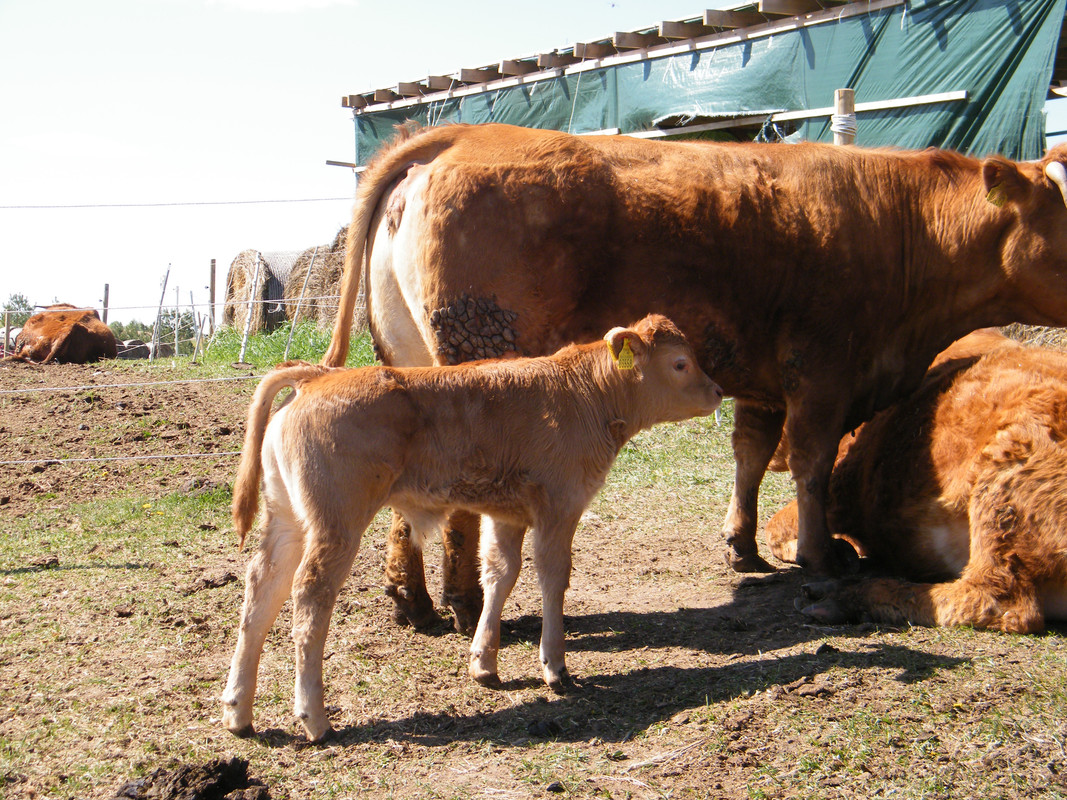 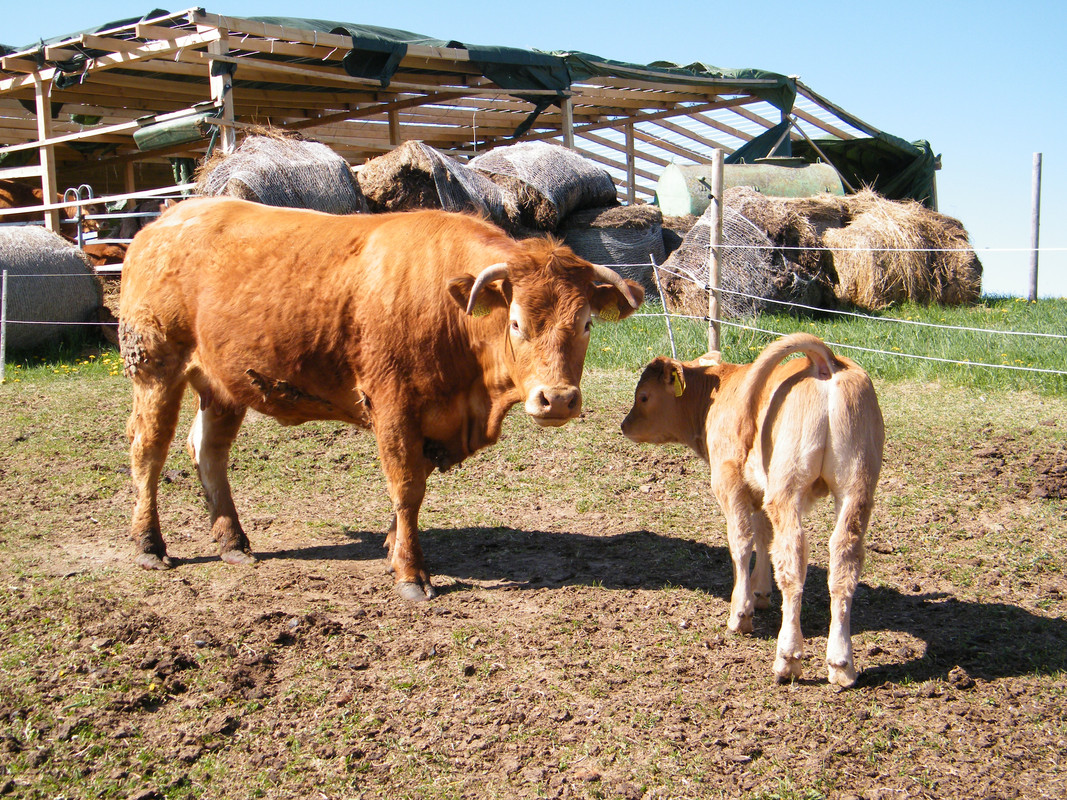 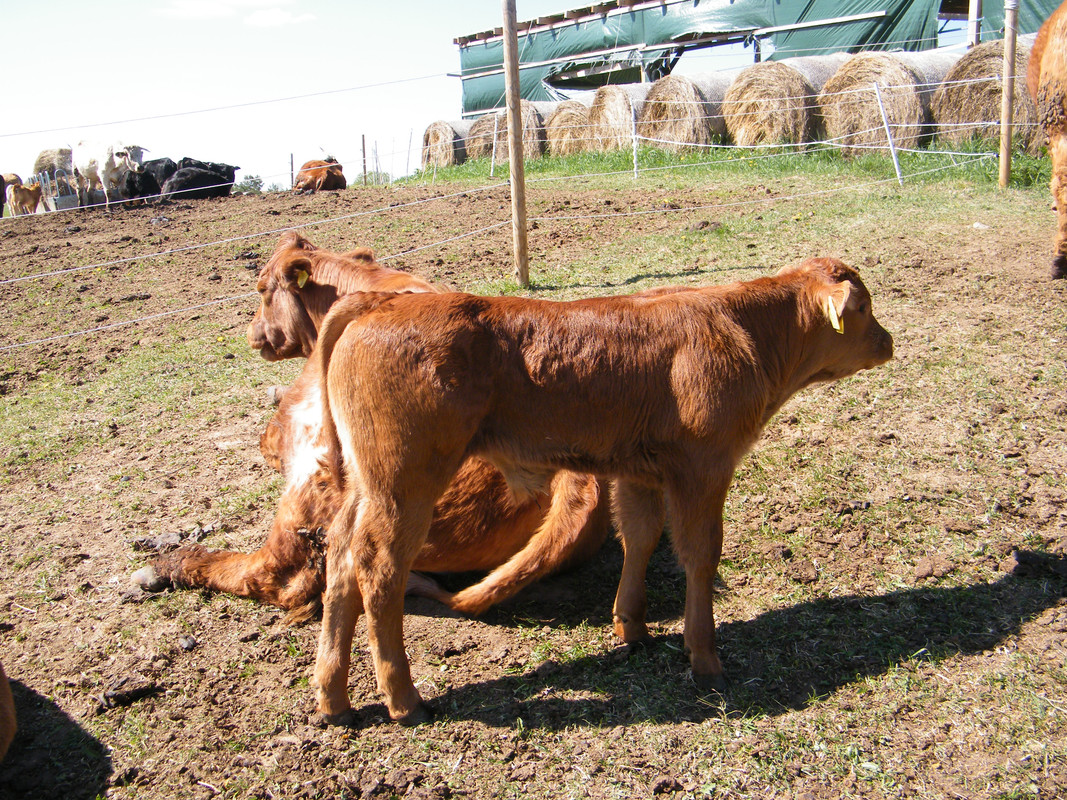 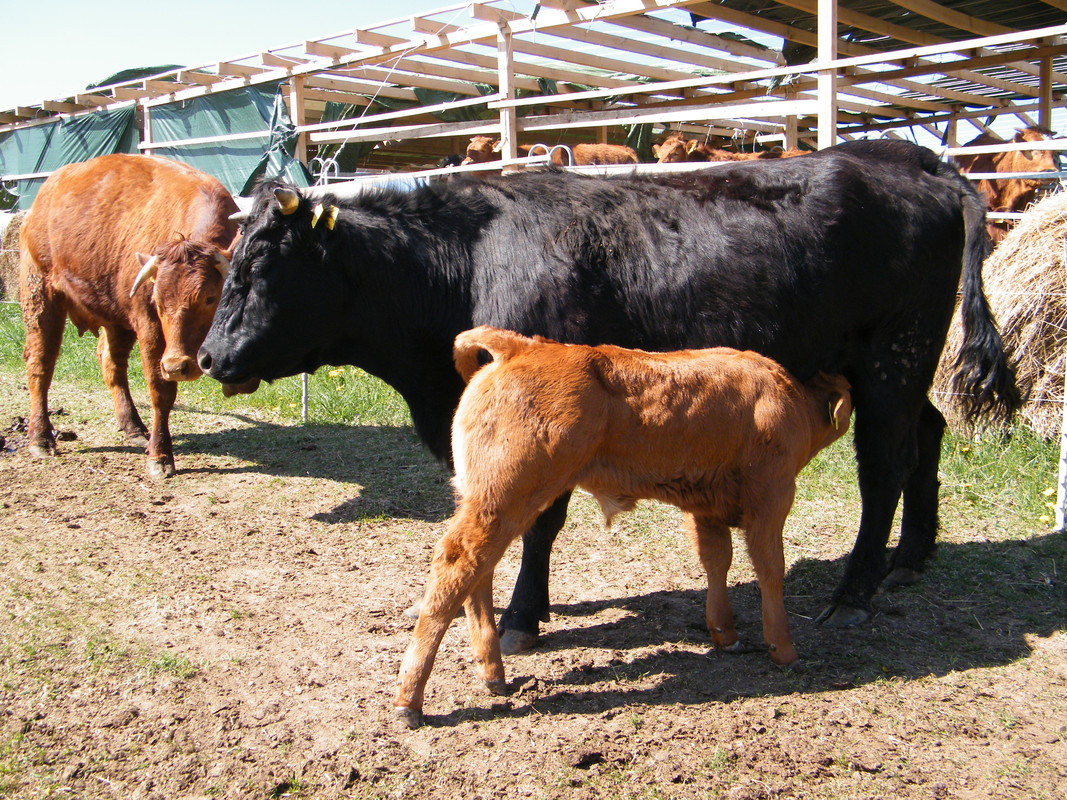 The eldest from calves. One month and two weeks old. Probably the most muscled calf from a heifer we've ever had. 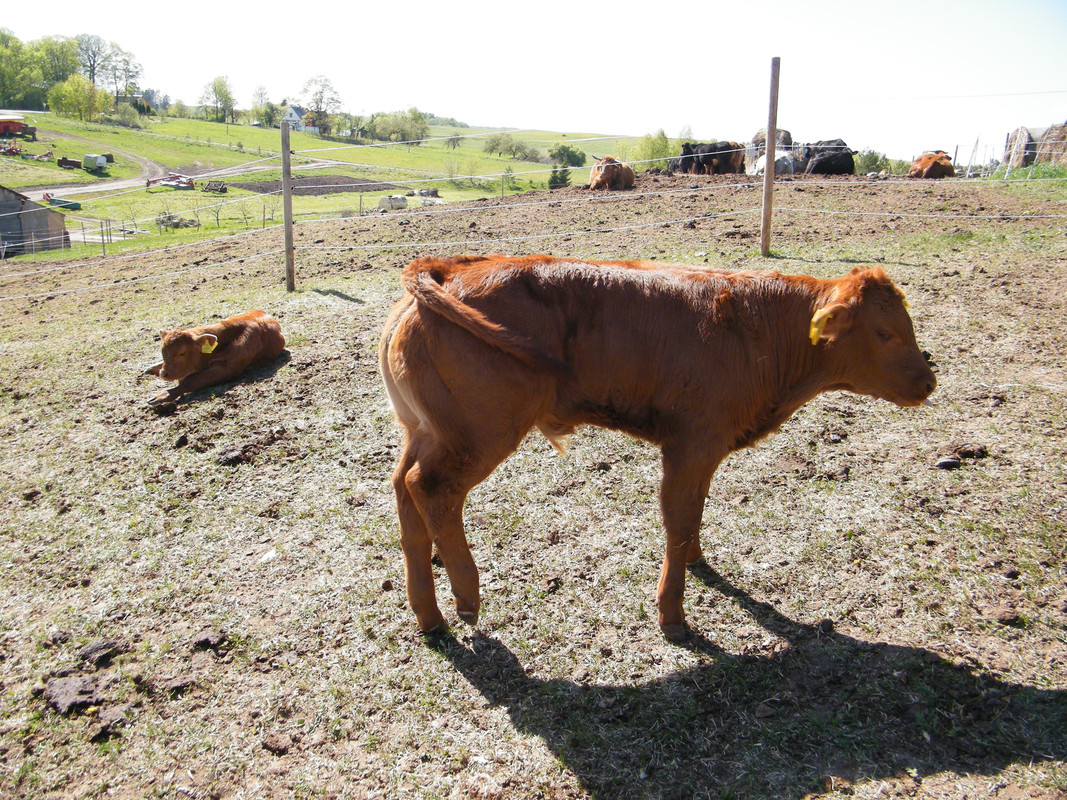 Yesterday have AI'd the heifer which has aborted. Used an easy calving limousine. If it was just my own decision I probably would have used something bigger for her like charolais or bb, but my mom wanted to go easier.
Top

Finally, the last heifer due in spring has calved today. She's the first daughter from our second limousine herd bull, so it was very interesting to see how it goes. She was AI'd with an average calving piedmontese. Have three calves from cows and that bull, and the smallest was 109lbs heifer.
This one is a bull calf, 296 days gestation- abit overcooked! Heifer is 26months old, calved herself. She's a good mom, have seen the calf nursing. 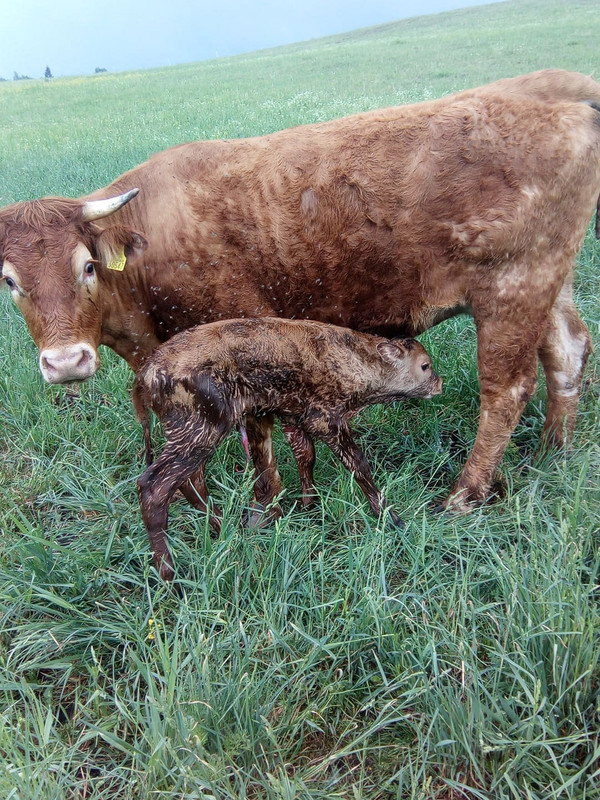 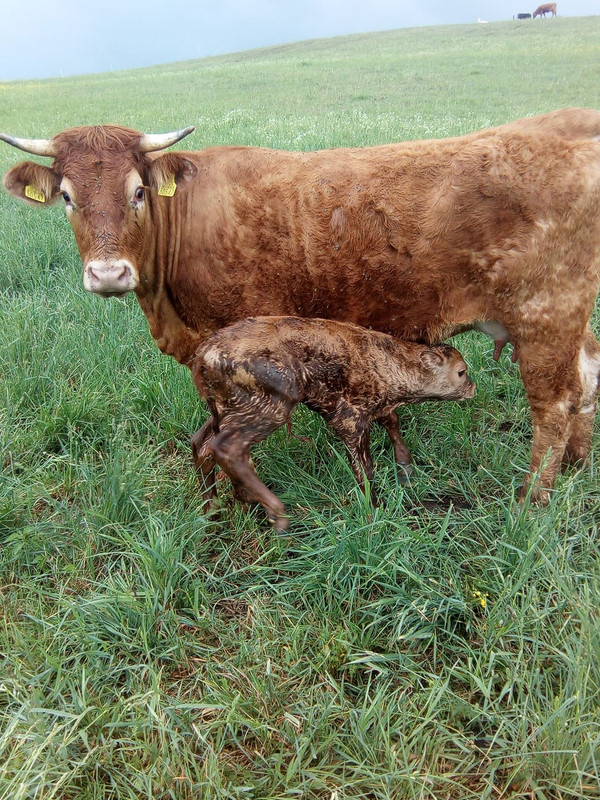