Breed your cows to the best bulls in the nation!
Post Reply
16 posts

Re: Bloody mucus at estrus

It is fascinating. I too have marveled at the parallels between human and Bovine reproductive physiology. When I stated in my post above that there is a correlation between ovulation and bleed off, I did not mean to imply that they occur simultaneously, they do NOT. My intent was to indicate a connection of the two events. In the broader application of the term "correlation", I think that is acceptable.

It has been a long time since I took schooling in reproductive physiology but I was fortunate to have schooled under Dr. James Spears who was a pioneer in Bovine embryo transfer. In his class, we had to complete a successful embryo transfer using mice. The concept is the same as in cattle and the hormones used are the same. Dr. Spears left University and went on to serve on the Board of North American Embryo Transfer. I might have some of the titles wrong, if so I apologize.

As to where the "blood of ovulation" comes from, I confess that I have forgotten some of that. When the follicle ruptures, it may release a very tiny amount of blood but it certainly could not account for what we see in those photos. The "blood of ovulation" (not a precise biological term) is, I think, associated with the endocrine effects on the uterus. Here is another photo. As you see, the amount of discharge can be significant. 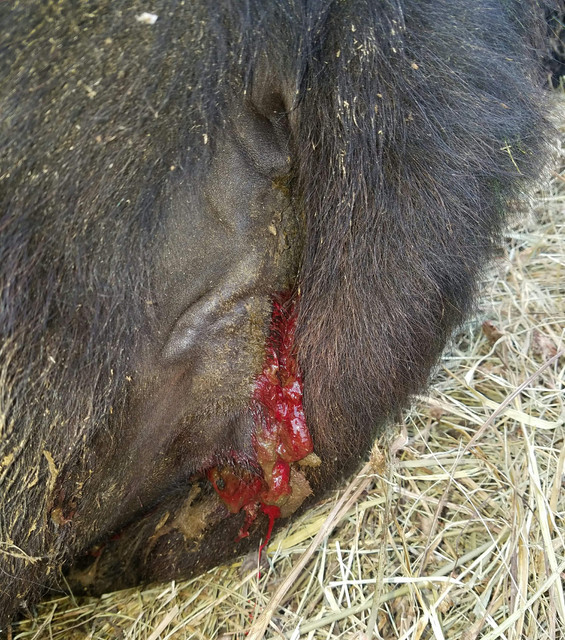 I was a part of a few clinical trials where I learned a ton about human reproduction. Once I started breeding cows I was amazed at the similarities.

I believe it’s still not a proven phenomenon. “Ovulation bleeding” and where the blood is actually coming from. Whether uterus or ovary. I’ve seen some experts write they think it’s the rupture of the cyst from the ovary and others write its from the drop of estrogen after the peak causing a disruption in the uterus as you call it endocrine effects

Thank you. No way that much blood comes from a follicle rupture.

I have read this publication before. I had forgotten the term. Metestrous bleeding. Yes, it comes from the uterus not the ruptured follicle.

"Some cows and most heifers have a bloody mucus discharge one to three days after estrus, but onset of this symptom, called metestrous bleeding, is quite variable. High estrogen levels during estrus cause blood to leak from vessels near the surface of the uterus"

"Looking for an honest man".
Diogenes.