Looked out upstairs window at my pond yesterday and noticed it was higher than it should be for the river level that it backs into.
Figured there was some kind of obstruction so put a shovel on the 4 wheeler, got on my rubber boots and took a ride to the far East side of the property and sure enough, beaver dam. Pond and it's tributaries all backed up about 2 1/2' above what they should be. There isn't enough trees left here along that waterway that they can cut down (except tallow and they won't chew them no way no how) so they build dams out of mud and grass all mixed together kinda like primitive people used to make bricks.


I spied a watcher nearby, keeping an eye on me...do you see him? 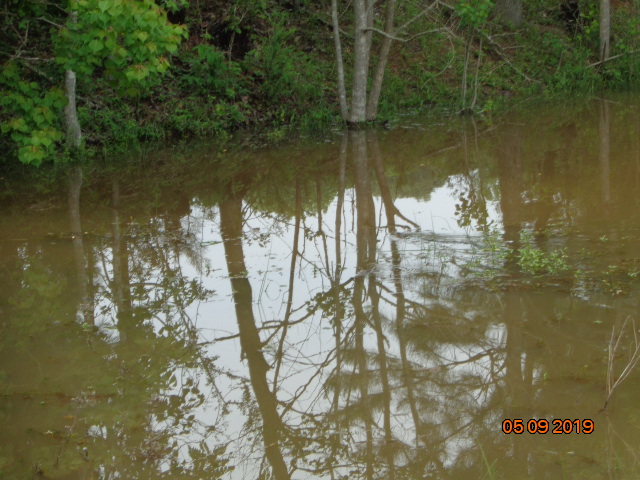 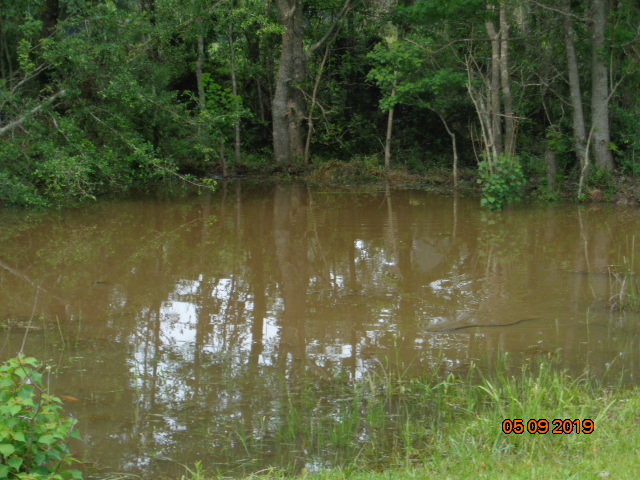 The dam is in the upper center of the above picture, edge of the water at the opening between trees in the picture above. Typical of a dam where there aren't a lot of softwood trees and debris. They make it out of mud and grass, which would have dried like concrete on top if I hadn't cut an opening in it. 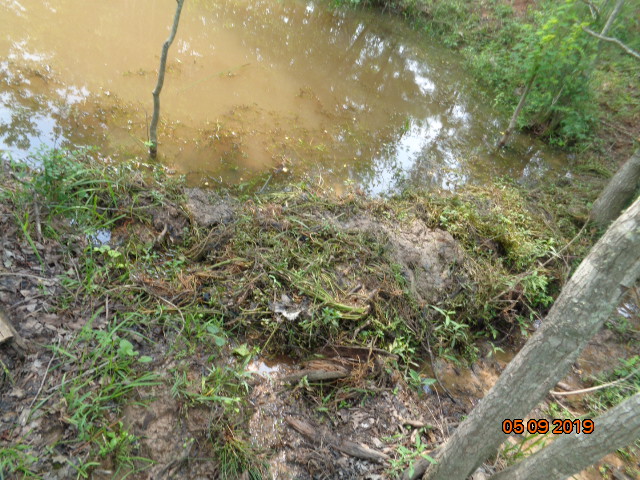 And, after I shoveled it all out..there goes the water, the last 150' to the river: 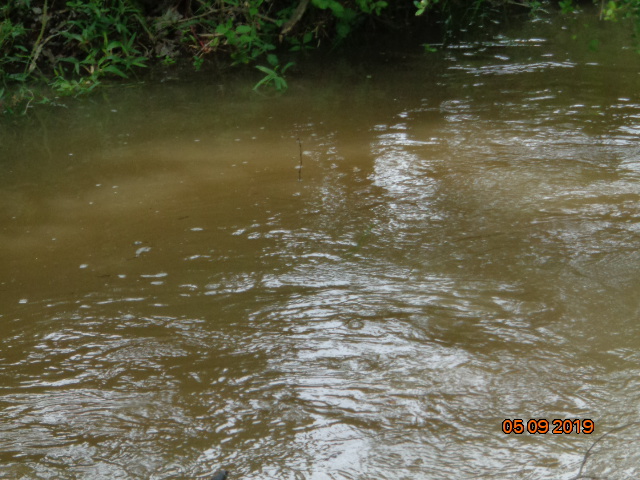 Wasn't without incident tho... 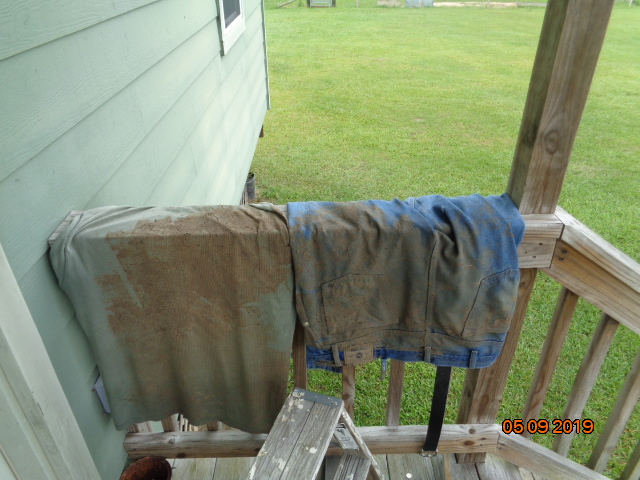 Slipped and fell off in there, flat on my back and all I could think of while trying to get back up was "Where the he// is that dam serpent?"

Had to leave my clothes on the back porch.............if you've never been around 'em, those are the stinkinest critters you can imagine, and so is everything they muck about in.

They may build it right back in the same place again, but it won't be tonight. With the rain we've been getting the last few hours, that's going to be a roaring torrent right there, and the storm cells are just lined up one behind the other.. 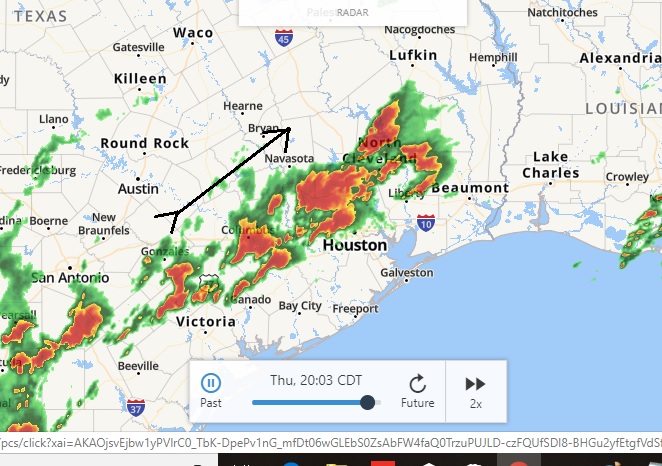 "For evil to flourish, all that is required is for good men to do nothing" Burke
Power corrupts. Absolute power corrupts absolutely.
It ain't easy being a used cow salesman.

I was a little apprehensive about clicking on this thread, been there, had some.

I have set here looking at that dam picture trying to find the beaver for at least five minutes. Could you circle him out?
Top

I have trapped lots and lots of beavers. I never noticed them stinking. Now skunks........ they stink.
Top

If you know greybeard.... the word “stinkin” is a placeholder for a slew of other words.

Aug 7, 2019 22:51GMT -5 the illustrious potentate said:
Because you have the freedom to say what you think, doesn't always mean that you should.

The right to speak freely is not free of consequences.
Top

For beaver it is a term of endearment.
Money doesn’t buy happiness, but the lack does buy misery.
Top

"Stinkin" may be a term of endearment, but I feel it also applies in the literal sense. These rodents have a unique scent that I don't care for. I used to sell the fur, my best spring I skinned 110 of the things. Those days are behind me and will not be repeated lol.
Top

The ones that didn't stink probably lived in cleaner water and environment than my pond water and bottom is. It's filled in over the decades with all kinds of sediment...decaying leaves, pine needles, cow poop and the mud itself is an awful clay.

JL...there was no beaver in the pictures. Water moccasin. That's why I tried to get my wrinkled ol butt up out of the mud & water as soon as I could, which wasn't very fast.
(Only once have I ever seen a beaver here in daylight as they are nocturnal, and that one time was the first day this spring that the weather warmed up and the sun was shinning brightly. He was a juvenile, swimming about, flipping over on his back, on his belly, having a grand ol time, and of course, I was unarmed at the time)

And I was wrong on two accounts. They did try to rebuild it last night and, they cut down some chinese tallow sapplings to make the base with. They have always left that stuff alone..nasty oozing sap.
"For evil to flourish, all that is required is for good men to do nothing" Burke
Power corrupts. Absolute power corrupts absolutely.
It ain't easy being a used cow salesman.
Top

Beavers smell like money, or a least they use to.


Got a 4 acre pond right now with beavers living in it. My count is at 2 adults, 1 two y/o, and 2 yearlings, and hopefully mama beaver popped out 2 or 3 more this spring. I'm letting them be till the fur prices come back up. Then I've got another creek to trap along with the pond when the time comes. The last time we trapped the creek we hauled out 10 beavers on just a 1/4 mile line, and end up with about $15 for the medium to $35 for the large. If we could get them sold today the bigger one's would only bring $5-6. Castor prices aren't bad right now though, if you can get some of the big males in the spring, you could get $15-20 just from the castor.
See what next winter brings.
Socialism: Making everyone equally poor since 1917
Top

No one traps around here anymore.
Lots of otters and coons out the wazoo.
Money doesn’t buy happiness, but the lack does buy misery.
Top

I have caught up to 14 in a day. I didn't mind trapping them but that is way too much time spent skinning for the amount of money they are worth today. One of my neighbors caught 58 coyotes this winter. He said the price was "pretty decent". Bobcats here are worth real money but there is a limit of 5.
Top

People have been trapping cats around here since they start the season a couple years ago, but our wet climate makes them worth half the price of Western cats.
Socialism: Making everyone equally poor since 1917
Top

Rule of thumb on beaver... If it stinks to much to eat , it ain't worth skinning.
Support your local hardworking white boy. 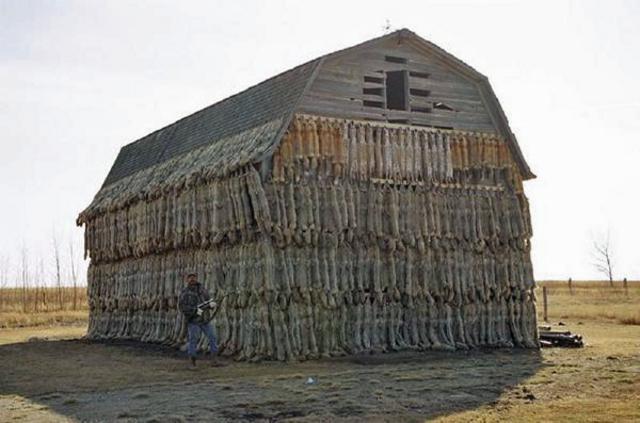 Who is that? I think I have seen that picture before.
Top
Post Reply
53 posts