greybeard wrote: ↑
Sun Jul 07, 2019 5:00 pm
They don't build many dams here in E Texas that look like the traditional beaver dams up north...don't build the same type lodge as their Northern cousins either. If ya don't know what to look for, you'll never know they're there. They tunnel into the steep banks under the water, go upwards to above normal water level, make several compartments, and the tunnels can go out into the side of the bank a long ways, with openings that look like a rabbit hole. I've dug several out with my backhoe..they can be extensive.

My little river would be called a creek most times and it's full of them, without a single dam anywhere, but if you know what to look for or listen close at night, you can hear them. The juveniles like to play and splash around. We get too much torrential rain here for a traditional stick dam to hold in place when the water gets into flood stage. They're happy enough in the river, using the deep pools that usually occur in bends of the channel instead of trying to dam up the flow.

The dams they do build here are almost always mud and grass, and if not torn out soon, will grow over with grass and brush and you'd think it's just a natural buildup of dirt and grass and brush. When they build those, they're like little bulldozers, pushing the aquatic grass and mud along in front of them in their front paws and into the dam base and top. They go out into the grassy areas near their tunneled lodges and gather or cut grass and leaves to line the nursery part of their lodges.

They will clog up drain culverts if they have to tho..had a pair do it several years ago.
Might take a picture of a dam that has been under construction for about 2 months now. Getting wider at the base, longer accross and higher all the time. Wide enough now that cows are walking on it.

What you are describing sounds a lot more like muskrats than beaver. 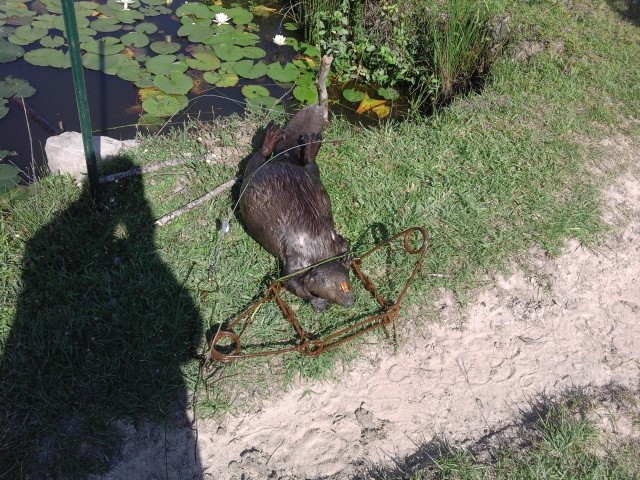 That is definitely not a rat lol.
Top

We always called beavers that tunnelled into the banks and didn’t build lodges “bank beavers”. I just googled the term and sure enough it’s not just a local yokel term.
Top

There have been attempts to build the traditional lodges here, but always out on the end of a little peninsula in the middle of the main pond body.

If this is correct, I can understand why all mine have gone to tunneling, and they are building their tunnels exactly as described:
Dens
A beaver den can be built in one of two styles, depending on the speed of the river and the fluctuation of water levels. The first type is a simple bank den, which is dug into the side of a river bank and covered with mud, sticks, and rocks, etc. over the top.

My pond is prone to extreme flooding and occasionally, fast flows.

This is one of two of the covered tunneled burrows I have on my ponds that I know of, but down on the river, all I've ever seen are their escape holes up on the high banks.
This one started off as just a bunch of sticks drug up from the water and then they covered it with mud. 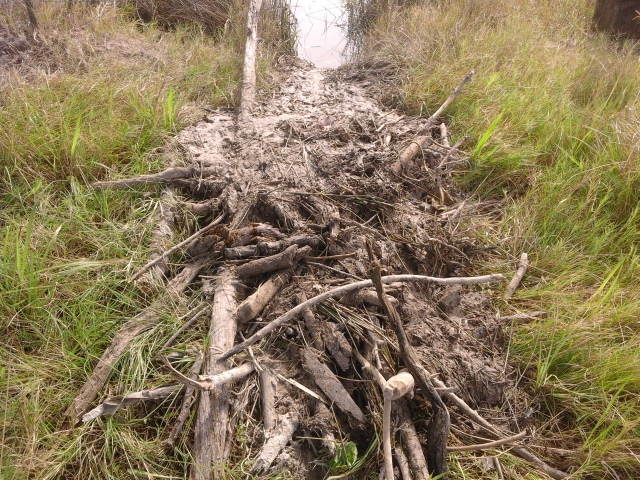 This is the one that has been built, washed away, torn down and rebuilt many times in the last 20-30 years. It's the one that is out on the peninsula. 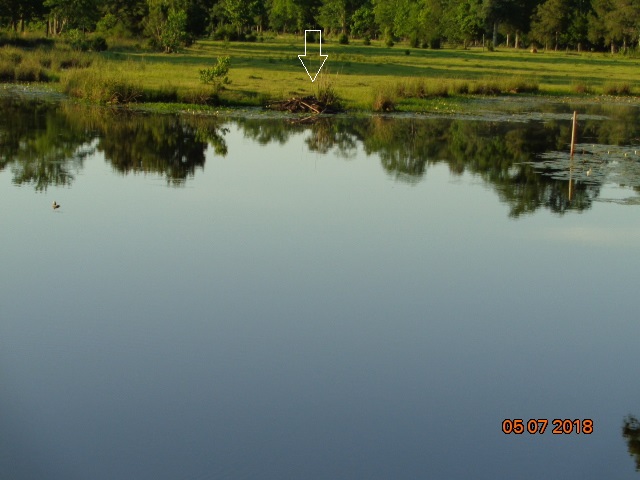 what they look like before they are covered in sticks. I tore it down a couple years ago after a major flood and they just built another right beside it. 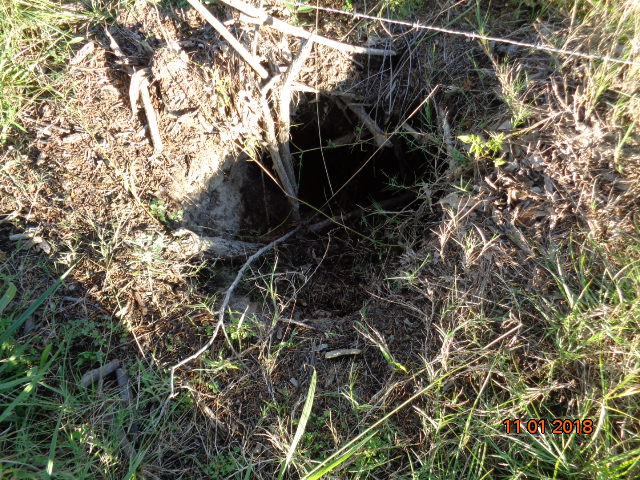 The little hollowed out cove on the left side is where the 1st and biggest tunnel complex was. I discovered it when tractor front tire dropped off in one of the cavities in 2009.
I dug the whole thing out with my backhoe and the cove is the result..before that, the bank/shoreline ran nice and straight and you'd never know they were even there. 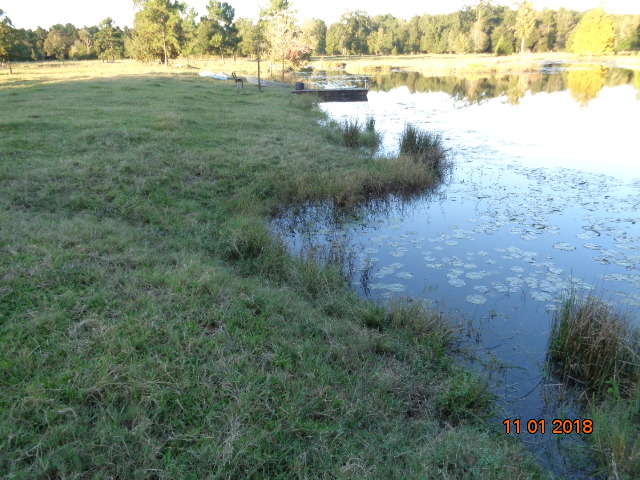 That's so totally different than how they do things here. But they are pretty darn good at adapting their environment to fit their situation so I won't argue with them. We are polluted with them here, I've got about 50 acres of hay land flooded out by them right now. I've taken the excavator and taken their dams out several times this year but it's a losing proposition as long as the creeks are still moving water. I'll have another go at it when the water quits running I guess. Worked too hard to get that land to give it back.
Top

I sure understand that Silver. I don't have that much underwater, but the picture above, dated 05-07-2018..the green part is almost all under water and it shouldn't be...they built themselves a mud & grass dam on the overflow canal. 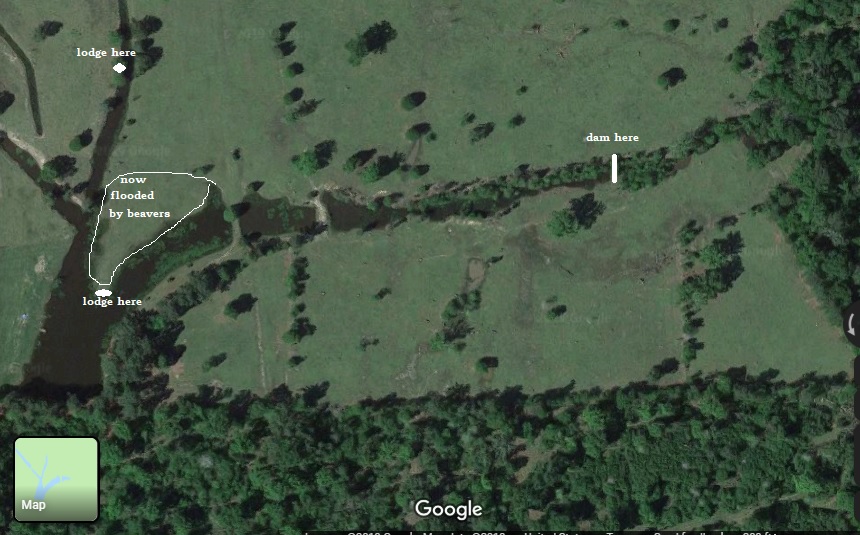 This one ain't a rat either. Something worse. Conibear don't play but The work never ends. 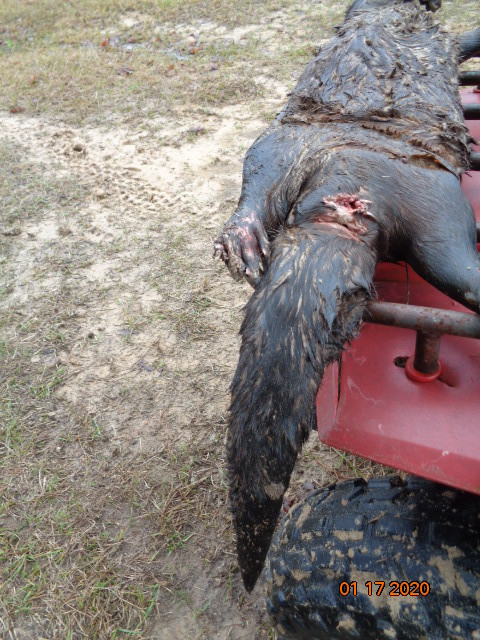 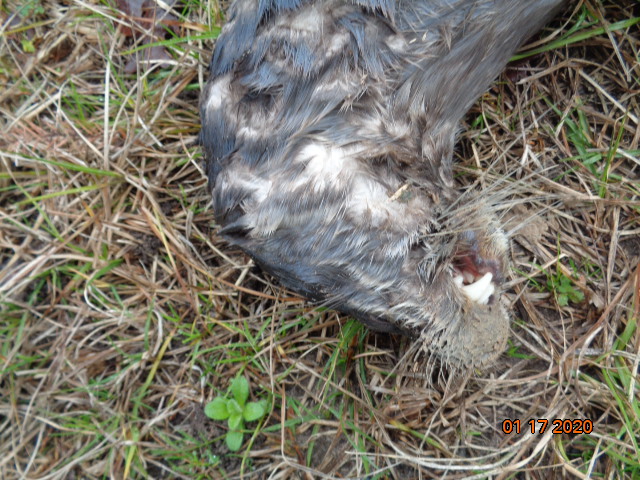 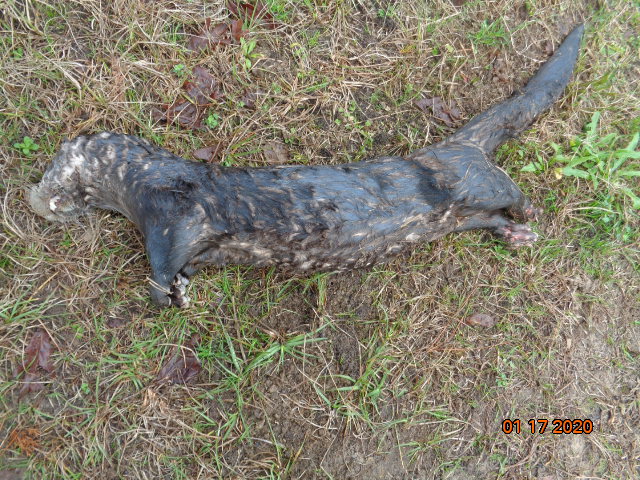 River otter. Shoulda kept his ax in the river and he wouldn't be cold and stiff today.
"For evil to flourish, all that is required is for good men to do nothing" Burke
Power corrupts. Absolute power corrupts absolutely.
It ain't easy being a used cow salesman.
Top

And another one gone..........Saw him fighting the trap yesterday morning thru binoculars from my upstairs window but it was pouring down rain so I waited till yesterday evening to remove him. Smallest so far.

There are more, as I can see new work as been done on the lodge at the end of the penisula. They've put more mud over the sticks and limbs that form the structure.
I do feel I'm finally making a dent in them this winter, but it's difficult to tell just how many colonies are in the pond system. I've learned a lot regarding their habits and how and where to trap them instead of just waiting around each night to shoot them.

Don't mess with the beavers around here!
Top

WF - your picture doesn't show up.
Why not mess with them?
Simme Valley of New York - http://www.SimmeValley.com
"We make a living by what we get,
we make a life by what we give."

[A man in upstate New York has been hospitalized after being viciously attacked by a beaver during a kayaking lesson.

Michael Cavanaugh was learning how to kayak at the Baycreek Paddling Center at Irondequoit Creek last week when he was attacked by an angry beaver.

The vicious varmint pulled Cavanaugh from his kayak and bit him several times, leaving deep punctures in both his arms.

A nearby kayak instructor heard Cavanaugh's screams and paddled out to beat the beaver to death.

Cavanaugh was later hospitalized and treated for rabies.

State wildlife officials say beaver attacks like this are rare. When they do occur, it's generally over a territorial dispute, but sometimes it's due to rabies.

LOL I had not heard that one. (I live in Upstate NY) I never have heard of beavers getting rabies. We have skunk, raccoons, fox, etc. Just never heard or thought about them getting it.
Simme Valley of New York - http://www.SimmeValley.com
"We make a living by what we get,
we make a life by what we give."

Bank burrowing beavers here. They don't even bother trying to build a dam.
B@st@rds keep cutting down 20 yr old pecans... just now coming into bearing. They couldn't be satisfied with eating the crappy boxelders..., no... they've gotta cut my pecans!
Gotta finish caging the ones I topworked to improved pecan & hickory varieties before they cut them...
Top
Post Reply
48 posts