Possible solution to a old problem

Bigfoot wrote: ↑
Tue Sep 10, 2019 9:18 am
Can't believe I'm weighing inhere.........5 gallon bucket, with the bottom cut out. Top side has a pool noodle zip tied to it. I prefer those heavy 5 gallon buckets with a flat side for horses. A small packet of wet wipes also makes the experience far more enjoyable.

That's pretty good. A bucket is still a pretty good size footprint on the back of a truck. But it could be set up on the job site and moved daily.
You know what...it would be good outside the deer stand as well. It's amazing the uses for those pool noodles....... maybe when you get time you could post a pic.

The bathroom in my LQ trailer is so small, you have to drop your pants in the hallway and back in. I keep one in my tack compartment at all times. They actually make liners for them, for that purpose. I just get in the horse compartment and do my thing. Seal the bag good, and toss the contents in a trash can. roping tonight at my house, so hopefully i remember.

Edited to add: spare to expense on the wipes. Get the quilted

Your not a small business owner. Your a stay at home mom trapped in a pyramid scheme.

Every king should have his throne..you could leave off the catch bucket while out on the jobsite. Let the chips fall where they may so to speak.
All you need is a collapsible version for the work rig. 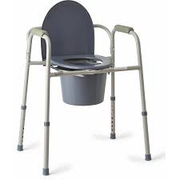 No act of kindness, no matter how small, is ever wasted. -Aesop
Exercising compassion provides the most linear and fulfilling state of happiness.
Top

bball wrote: ↑
Tue Sep 10, 2019 3:23 pm
Every king should have his throne..you could leave off the catch bucket while out on the jobsite. Let the chips fall where they may so to speak.
All you need is a collapsible version for the work rig.

got one of those for $30 to deal with no "handles" in my bathroom after knee surgery. think it could be REAL handy around barn or working pens away from house.

My throne away from home.
Your not a small business owner. Your a stay at home mom trapped in a pyramid scheme.
Top

Have you ever had to go when out in the field or woods. Say that you have a pair of overhauls on. You have pulled the bib and suspenders up and out of the way. After you have finished the job and cleaned your self best that you could and you get up and the clip on the suspenders fall in the pile while getting up. That is catastrophe that happens and you have to live with the smell the rest of the day.
What if Martin Luther King jr's dream had come true.
Top

Well have you ever thought of taking a camping chair and modifying it? It wont stick out then you have in in the back of the truck like a toilet seat would... two for two if you ask me. you get to poo in comfort and from a distance your incognito...
Top

Why not a 5-gallon bucket turned upside down with a hole cut in it?

I don't wanna carry a bucket of crap around with me. For Pete's sake...
.

I would rather cut off my right arm, than live under tyranny!
Top

Bright Raven wrote: ↑
Wed Aug 28, 2019 7:19 pm
You would be surprised how important bowel movement was considered in the 1920s and 1930s. It was the "health" fad of the times like the keto diet is today. My maternal grandfather never went anywhere without toilet paper. People of those times in the hills of Kentucky considered a good bowel movement as important as exercise. My mom said granddad would line them up once a week for a dose of laxative - I have forgotten the name but it was later discovered to be a carcinogen. Lol.

Anyway, my maternal Uncle adopted many of those habits. When I was living in Montana and he was in his early 70s, he and my aunt came for a visit. We took them to Yellowstone. My Aunt and Uncle had the room next to us. It was getting about 9 am and I wanted to get out and show them the park. Aunt Clara knocked on the door and said "Bill is so upset". I said why. She said because his bowels won't move. She said please give us more time because Bill will be a pain in the azz the rest of the day if he don't have a good morning bowel movement.

My great grandpa had to go first thing every morning or his day was ruined. Big dose of castor oil every night at bed time made sure this happened.
Same grandpa had a onery pony (is there any other kind?) that seen him go in the outhouse and kicked him through the wall! Grandpa exacted his revenge by putting up a new stretch of hot wire and tying a ribbon to it, then watched and waited for curiosity to kill the cat. Or pony, as it were. Took the wire down after pony had his nibble.

Another local old man told me about him and some buddies that got into some peach cider when they were boys. He said they had a sxittin' contest, they back up to the barn and see who could sxit the highest on the side of it.

Them was the good old days!
Top
Post Reply
53 posts